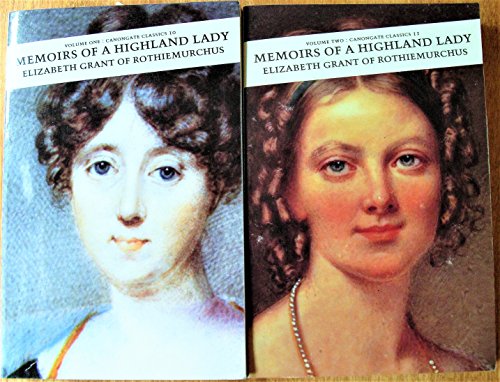 Memoirs of a Highland Lady is one of the most famous memoirs ever written. Since its first bowdlerised edition in 1898, it has been consistently in print. This is the first ever complete text.

Written between 1845 and 1854 the memoirs were originally intended simply for Elizabeth's family, but these vivid and inimitable records of life in the early nineteenth century, and above all of the great Rothiemurchus estate, full of sharp observation and wit, form an unforgettable picture of her time.

"If you have never read it before, do so now...compelling...delicious insights into a way of life long passed, as well as glimpses of the familiar...a warm, human, revealing account of a young woman's life." (Scottish Review of Books)

Elizabeth Grant (1797-1885) was born in Edinburgh's fashionable New Town. Most of her childhood was spent in London and on the family estate, Rothiemurchus, on Speyside. She was educated by governesses and in the social graces by various tutors, finally entering Edinburgh society at the end of the Napoleonic wars.

The trauma of a broken engagement was followed by the disastrous failure of her father's career. This involved a huge burden of debt which, in 1820, forced the Grants to retreat to their Highland home. As her contribution to improving the family fortunes, Elizabeth and both her sisters wrote articles for popular magazines of the day.

In 1827 the family left Scotland for India when her father was appointed to a Judgeship in Bombay. It was here that she met and married Colonel Henry Smith, seventeen years her senior. They left for Ireland the following year to live at Baltiboys, her husband's newly inherited estate situated near Dublin.

She devoted herself to raising a family and took up the leading role in managing and improving their impoverished estate. For over half a century Baltiboys was to be her home, her life and her occupation, her resolve never failing even after the death of her husband and her only son.