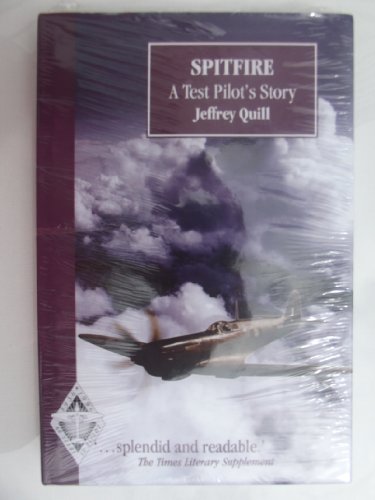 An exceptional test pilot, Jeffrey Quill took charge of some of the most important military aircraft of his time and, in particular, the immortal Spitfire from its experimental, prototype stage in 1936 to the end of its production in 1948. He used his first-hand experience of combat conditions fighting with 65 Squadron at the height of the Battle of Britain to help turn this elegant flying machine into a deadly fighter airplane.

An autobiography in which Quill reflects upon his experiences as a test pilot with the Spitfire during World War II. Describes the early problems of mass production, of developing its capabilities and dealing with its defects.

Book Description Air Data Publications, 1996. hardcover. 1996 Revised Edition. 335pp, owner's signature, Fine in Fine dw This is the personal account of an exceptional Spitfire test pilot and RAF and Fleet Air Arm fighter pilot. The new edition was published to celebrate the sixtieth anniversary of the Spitfire, which flew for the first time in March, 1936. Glacier Books are experienced and professional booksellers. We take pride in offering carefully described books and excellent customer service. Seller Inventory # 51230

Book Description Crecy Publishing, 1996. Paperback. Condition: Very Good. Spitfire: A Test Pilot's Story This book is in very good condition and will be shipped within 24 hours of ordering. The cover may have some limited signs of wear but the pages are clean, intact and the spine remains undamaged. This book has clearly been well maintained and looked after thus far. Money back guarantee if you are not satisfied. See all our books here, order more than 1 book and get discounted shipping. . Seller Inventory # 7719-9780859790932