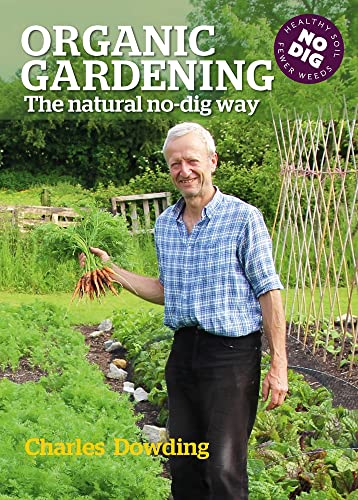 One of our most respected vegetable growers ... Now ordinary gardeners can benefit from his years of practical experience. --Joy Larkcom, author of Grow Your Own Vegetables

Charles is a passionate and accomplished gardener who grows vegetables of amazing flavour --Raymond Blanc, OBE, world-renowned chef and restaurateur

Charles's crops positively grow with health, in testament to his methods... he conveys a deep reverence for the soil, which has fuelled his no-dig ethos. --Kitchen Garden Magazine

Charles is a veteran organic grower, having practised no-dig gardening for 30 years. From 1982 to 1990 he grew on nine acres for local and London markets, then ran a small farm in France, followed by a long spell of producing salad on an acre of surface-composted, undisturbed clay soil (no-dig for 15 years), which grew bountiful crops and few weeds, and included two polytunnels for winter salad and summer tomatoes and basil. In this garden he ran an experiment for six years to compare differences in growth between vegetables on dug and undug soil. He discovered different patterns of growth in most seasons, with slightly lower yields and more weeds and slugs on the dug beds. He is currently establishing a new half-acre garden to illustrate no-dig practice and form the basis for a new experiment. Charles has written four books on vegetable growing, contributes articles to many magazines, including Gardeners' World, Gardens Illustrated and Grow It!, gives regular talks, advises many gardeners on best practice, including the National Trust at Sissinghurst, and runs day courses at home and other venues. He has appeared on radio and television, including Radio 4's The Long View on the Peckham Experiment and BBC TV's Gardeners' World with Sarah Raven in 2008.

Book Description Hardback. Condition: New. 3rd edition. Language: English. Brand new Book. Charles Dowding (the guru of no dig gardening) shares his organic, no-dig approach to soil and plants. He reveals revealing the techniques that enable him to grow healthy, vibrant crops while maintaining a healthy soil. His success is based on these key principles * No-dig * Spread organic matter on the soil surface * Clean & improve the soil in the first 3-12 months * Weed every 10 days or so, when weeds are small. By using a system of permanent, slightly raised beds, Charles shows how to grow a delicious variety of fruit and vegetables sustainably and organically: what to choose; when to sow, plant and harvest; and how best to avoid pests and diseases. Seller Inventory # AAO9780857844651