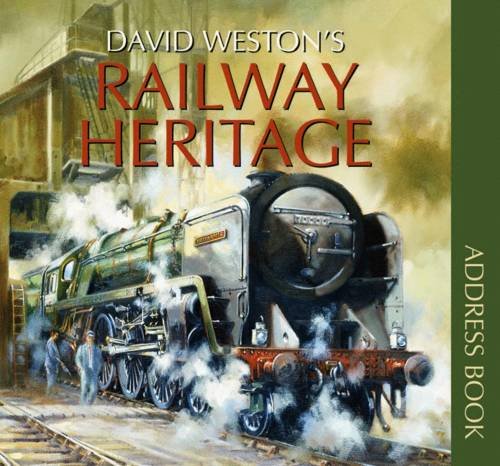 David Weston has established himself as one of the country's most important `railway' artists. In fact his range varies widely, with landscapes, architecture and pastoral subjects all forming part of his extensive canon of works, but it is his railway scenes that have become something of a trademark. His paintings, in oil and watercolour, are much sought after by collectors throughout the UK and internationally and have been included in a number of publications, among them David Weston's England, An Artist at Home and Abroad, and the critically acclaimed Letting Off Steam.

Born in 1935 he well remembers the days of the `big four' companies prior to the birth of British Railways in 1948. However, the end of the steam era during the 1960s is what inspired him to paint not only the glory days of the steam years but also the run-down and eventual demolition of locomotives in the scrapyards of those years. His work led to a prestigious exhibition at the British transport museum in 1969 which enabled the artist to become a full-time professional and from which he has prospered and enjoyed to this day.

His work has been commissioned by many large institutions including British Rail, and amongst his one-man shows two were held at the mecca for rail enthusiasts, the National Railway Museum in York. David holds an annual exhibition at his Leicestershire studio in October each year, invariably resulting in a sell-out.

This address book is produced for those who share the artist's passion for our railway heritage. Address books tend to be well used and have a long life. Along with important contact details, they keep track of the user's friends and acquaintances, tracing their lives over time and from place to place. And, if properly attended to, an address book eventually becomes a journal in itself, and an attractive and permanent keepsake.

Whether bought for your own use, or received as a gift, this address book with its superb illustrations will provide years of pleasure.

Book Description Halsgrove Publishing, 2010. Hardcover. Condition: Used; Good. Dispatched, from the UK, within 48 hours of ordering. This book is in good condition but will show signs of previous ownership. Please expect some creasing to the spine and/or minor damage to the cover. Seller Inventory # CHL1174261

Book Description Halswood, 2010. Hardcover. Condition: Very Good. Very Good: a copy that has been read, but is in excellent condition. Pages are intact and not marred by notes or highlighting. The spine remains undamaged. Most items will be dispatched the same or the next working day. Seller Inventory # mon0007799331

Book Description Hardback. Condition: Very Good. The book has been read, but is in excellent condition. Pages are intact and not marred by notes or highlighting. The spine remains undamaged. Seller Inventory # GOR006622929

Book Description Halswood, 2010. Hardcover. Condition: Good. Good condition is defined as: a copy that has been read but remains in clean condition. All of the pages are intact and the cover is intact and the spine may show signs of wear. The book may have minor markings which are not specifically mentioned. Most items will be dispatched the same or the next working day. Seller Inventory # mon0011071135