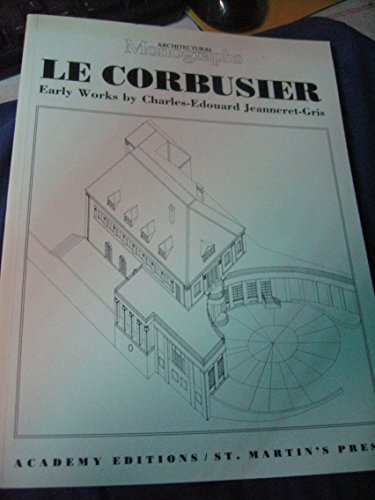 Book Description Original softcover. Condition: Sehr gut. Architectural Monographs ; 12. 136 p., many ill. Overall very good and clean. - Foreword: The centenary of Le Corbusier's birth in 1887 provides an opportunity for a major reassessment of his ceuvre. As the most influential architect of the first half of the twentieth century he is best known for his leadership of the Modern Movement during the 1920s and for that powerful and sculptural series of buildings during the 1950s which include the Unite at Marseilles, the chapel at Ronchamp, the monastery at La Tourette, the Jaoul houses and Chandigarh. Inevitably, three decades on, the pendulum of architectural fashion has swung away from an uncritical deification of the masters of Modern architecture and their icons towards a pluralistic cacophony of images and styles. After such a short time it seems also inevitable that the masters, including Le Corbusier, should come under attack, even if the criticisms are at best uninformed and at worst malevolent. Clearly more-time must elapse before a dispassionately objective position can be taken regarding Le Corbusier's position in the twentieth century. However, the present view is impaired by substantial gaps in many people's knowledge which prevent a proper understanding of his aims and objectives. Seldom is account taken of the way Le Corbusier's creative output was affected by the formative influences on him and by the prevailing spirit of an age in which significant changes were happening almost decade by decade. It is not, for example, generally understood how far the circumstances of his training in La Chaux-de-Fonds set him on course for all his later achievements. In this sense it is unfortunate that the least-known period of his life should in retrospect now seem probably the most important. The early years in La Chaux-de-Fonds have until recently been so neglected that even now many are unfamiliar with those writings, sketchbooks and buildings created in his own name of Charles-Edouard Jeanneret, between 1904 and 1916. This Monograph sets out to remedy this deficiency by documenting the early houses in and near La Chaux-de-Fonds. As built works, these houses crystallise Jeanneret's philosophical position and show how his design technique was beginning to develop. The built work expresses the architect's intentions more clearly than his other forms of expression and these early houses explain the changes in Jeanneret's perception of architecture induced first by study and then by travel. Because so little is known of these works, this Monograph addresses itself to the task of a full documentation of the early houses in terms of drawings and illustrations. Geoffrey Baker has been commissioned to redraw the existing plans, sections and elevations of these buildings, and to provide axonometrics. In addition to furnishing most of the illustrations of the houses, he has contributed an article in which each house is analysed in relation to its context and is considered in relation to Jeanneret's evolving design technique. Baker also discusses the way Jeanneret's education in La Chaux-de-Fonds and on various study tours affected his development as a designer and details those changes in technique which took place as he moved away from a local vernacular imagery towards a more classical approach. This development is shown to have taken place as a result of an awareness of the potential of geometry, which was organised in the later villas so that movement towards and into the building became part of the geometrical concept. Baker's study is complemented by two essays written by Jacques Gubler. The first of these, 'From Feeling to Reason: Jeanneret and Regionalism', gives the background to the early projects in La Chaux-de-Fonds, placing them in the context of Jeanneret's education. His discussion embraces the twin topics of nature and the machine which preoccupied Le Corbusier throughout his life. The second essay, In Time with the Swiss Watchmakers', reveals how Jeanneret's early career was influenced by the predominance of the watchmaking industry in his native town, and traces his evolution from apprentice watchcase engraver to architect via commissions from watch manufacturers in La Chaux-de-Fonds. ISBN 9780856708046 Sprache: Englisch Gewicht in Gramm: 714. Seller Inventory # 1184732