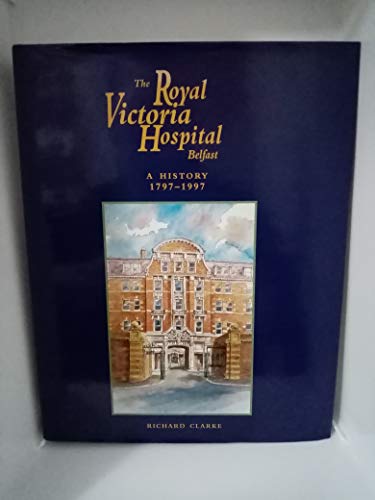 This history of the Royal Victoria Hospital in Belfast, Northern Ireland traces the years of development and expansion, as the hospital responded to the needs of a growing and turbulent population. The men and women whose skill and devotion have won an international reputation for the hospital are described, and lists of staff, past and present, are included. From its beginnings in 1797 as the Belfast Dispensary and Fever Hospital in Factory Row (now Berry Street), the hospital has served the city of Belfast for 200 years, earning the respect of generations of patients and their families. Numerous doctors and nurses trained by the Royal are now practising in Great Britain, North America and around the world.

Book Description Blackstaff Press Ltd, 1997. Hardcover. Condition: Good. Neat dedication on the opening page Good condition is defined as: a copy that has been read but remains in clean condition. All of the pages are intact and the cover is intact and the spine may show signs of wear. The book may have minor markings which are not specifically mentioned. Most items will be dispatched the same or the next working day. Seller Inventory # wbb0016029414

Book Description Blackstaff Pr, 1998. Condition: Good. A+ Customer service! Satisfaction Guaranteed! Book is in Used-Good condition. Pages and cover are clean and intact. Used items may not include supplementary materials such as CDs or access codes. May show signs of minor shelf wear and contain limited notes and highlighting. Seller Inventory # 0856406015-2-4

Book Description Blackstaff Pr, 1998. Hardcover. Condition: Fair. 100% satisfaction guaranteed! We ship quicklyA great value based option. May have used stickers. May show moderate to heavy wear or use. Highlighting/Underlining/Margin Notes may be present. Does Not include codes, CDs/DVDs, or other supplementals. All pages present and legible. Seller Inventory # BLK400720362

Book Description Blackstaff Pr, 1998. Hardcover. Condition: VERY GOOD. Pages are intact and are not marred by notes or highlighting, but may contain a neat previous owner name. The spine remains undamaged. Supplemental materials are not guaranteed with any used book purchases. Seller Inventory # 0856406015_abe_vg