Items related to ALL THE WORLD'S FIGHTING SHIPS 1947 (Conway's... 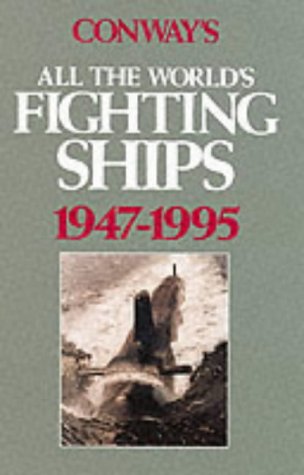 Ten years have passed since the two-volume "Conway's All the World's Fighting Ships 1947-1982" was published and in that time, profound changes have occurred in the make-up of the world's navies, and the aftermath of the break up of the Warsaw Pact represents an opportune time to revise the work and bring it up to date. Particularly relevant to the updating of this volume has been the release of new information which has come about as a result of: the break-up of the Warsaw Pact; the unification of Germany and the take-over of ex-East German ships; and over all navies there now hangs the question mark over their role in the post-Cold War era and the sceptre of defence cuts. A whole range of recent technical developments are chronicled including: the commissioning in the USSR of the first large-deck carriers; the arrival in Britain, Holland, Sweden and Japan of a new generation of high-tech conventional submarines; the revival of interest in close-in air and missile defences, and the adoption of stealth technology at sea. It covers the Gulf War which involved the biggest naval deployment since 1945.

All these developments, and all associated launchings and commissionings are covered, and so bring this title up to date to make it a core reference book for all those who follow naval affairs.

Book Description Condition: Used: Very Good. UNCLIPPED DUST JACKET. DUST JACKET SHOWS SOME WEAR. BOOK ITSELF IN EXCELLENT CONDITION WITH ITS CONTENT CLEAN, TIDY, BRIGHT AND FRESH THROUGHOUT. **SENT BY COURIER FROM UK STOCK.** "Always choose Readerz3, the best deal around for YOU and me!" 19. Seller Inventory # 0306V3YF0AL