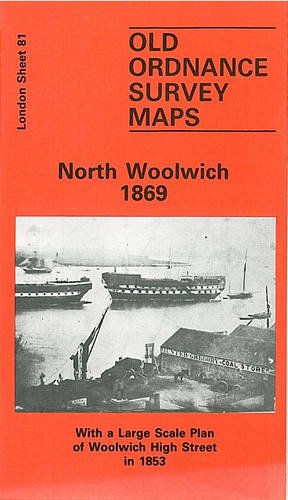 Here are the details of maps for North Woolwich: London Sheet 81.1 North Woolwich 1869 - published 1986; intro by Howard Bloch. ISBN.90-85054-044-4 London Sheet 81.2 North Woolwich 1894 - published 1988; intro by Howard Bloch. ISBN.978-0-85054-203-5 We have published two versions of this map, showing how the area developed across the years. The maps each cover the same area, with North Woolwich well covered but also with a stretch of Woolwich proper, including the High Street and waterfront, at the foot of the map. The area developed greatly over these years, so the maps are described separately below: The 1869 map shows North Woolwich at an early stage of development. The railway is shown to North Woolwich station, and near it are the Pavilion Gardens, complete with maze, ball room and dancing platform. To the west are a few factories and houses, while all around is marshland. South of the river is part of Woolwich with the High Street, piers etc. Our map is labelled "For War Department Purposes Only" and so is remarkable for showing the War Office lands in full, information normally censored out. This includes a good section of the Royal Arsenal, including Military Store Department and Royal Gun Factory Department; details such as railway tracks, mortar beds, cranes, even latrines are shown. West of the High Street similar detail is given for the old dockyard, which launched its last ship in 1869. Here slipways, stores, capstans, docks etc are shown. On the reverse we include an even larger scale map of Woolwich High Street, from the 10ft to the mile map (here reduced in scale to 5ft to the mile). Wonderful detail. The 1894 map is very different. Woolwich itself is less interesting here, for the War Dept areas are left blank for security reasons. But North Woolwich is now far more developed. Industry includes Henley's electric telegraph works, but the major new feature is the Royal Albert Dock, most of which is included, including the Basin and locks to Gallions