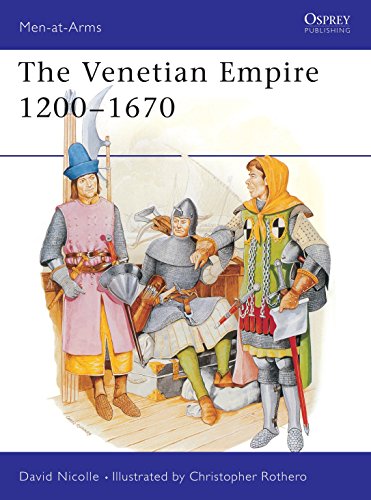 The story of Venice is, to some extent, separate from that of the rest of Europe. The same could be said of the city's military history and organisation. Early in the 9th century the Venetians defeated Pepin the Frank's attempts to overawe them, and they remained, at least in theory, subject to Byzantium. Gradually, however, Venice drifted into independence; and subsequently carved out its own empire at the expense of its former Byzantine masters. The Venetians were soon famous for their roving and warlike spirit, keen business acumen and pride. This book explores the remarkable history of the city and its army from 1200 up until 1670.

David Nicolle was born in 1944 and was educated at Highgate School. For eight years he worked in the BBC Arabic Service. In 1971 he went 'back to school', gaining an MA from the School of Oriental and African Studies and a PhD from Edinburgh University. For some years he taught art and architectural history at Yarmuk University, Jordan. David has written many Osprey titles, including MAA 140 Armies of the Ottoman Turks, MAA 320 Armies of the Caliphates 862-1098, and Campaign 43 Fornovo 1495. Christopher Rothero is an expert on the armies of medieval Europe. He has written and illustrated several titles for the Osprey Men-at-Arms series including Men-at-Arms 111 The Armies of Crécy and Poitiers 1200-1670 and Men-at-Arms 113 The Armies of Agincourt.