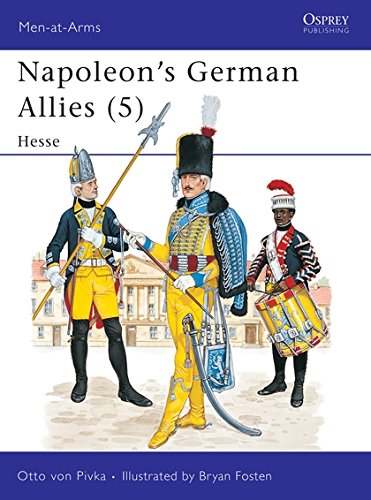 During the Napoleonic Wars the region of Hesse was divided between Hessen-Kassel and Hessen-Darmstadt. Under Napoleon's patronage, in 1806 Hessen-Darmstadt received all remaining imperial possessions within its borders and was elevated to a Grand Duchy. That same year, Hessen-Kassel, under Imperial Elector Wilhelm I, was dissolved and incorporated into Jerome Bonaparte's Kingdom of Westphalia, resulting in significant political, administrative and sartorial changes. This richly illustrated book details the organization, campaigns, uniforms, and colours and standards of the forces of Hessen-Darmstadt and Hessen-Kassel from 1792 to Napoleon's defeat in 1813.

Otto von Pivka (the nom de plume of Digby Smith) wrote his first title for Osprey Publishing in 1972. He is a prolific author, who has contributed many titles to the Men-at-Arms series on the armies and forces of the Napoleonic Wars. A former major in the British Army, he is now retired, but continues to write books on this key period. Bryan Fosten was born in 1928, the son of a Master Military Embroiderer and a Court Embroidress. He served in the army in Egypt and Palestine and returned to follow the printing trade. Since 1973 he has devoted himself to military research and illustration. He is the founding editor of the innovative magazine Tradition and has written and illustrated many books, often in collaboration with his late brother, Donald Fosten.