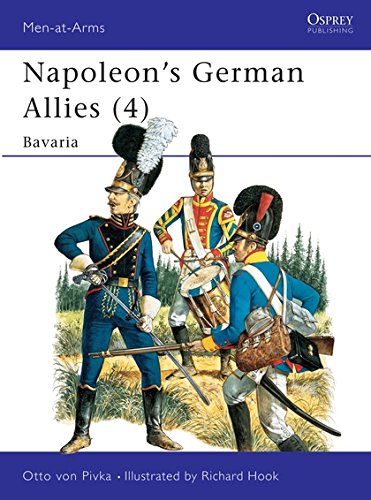 In 1805, Bavaria allied itself with France and Bavarian troops served with Napoleon during the 1809 campaign against Austria, and participated in the Russian campaign of 1812, before eventually abandoning the Emperor's cause in 1813 prior to the battle of Leipzig. They then engaged Napoleon's troops in combat at the battle of Hanua in an unsuccessful attempt to cut off their retreat to France. This book by Otto von Pivka provides an in depth examination of the organisation, equipment, weaponry and uniforms of Napoleon's Bavarian allies. The fascinating text is accompanied by numerous illustrations and eight full page colour plates.

Otto von Pivka (the nom de plume of Digby Smith) wrote his first title for Osprey Publishing in 1972 (The Black Brunswickers, in the Men-at-Arms series). He is a prolific author, who has contributed many titles to the Men-at-Arms series on the armies and forces of the Napoleonic Wars. A former major in the British Army, he is now retired, but continues to write books on this key period. Richard Hook was born in 1938 and trained at Reigate College of Art. After national service with 1st Bn, Queen's Royal Regiment he became art editor of the much-praised magazine Finding Out during the 1960s. He has worked as a freelance illustrator ever since, earning an international reputation particularly for his deep knowledge of Native American material culture; and has illustrated more than 30 Osprey titles. Richard is married and lives in Sussex; his three children Adam, Jason, and Christa are all professionally active in various artistic disciplines.