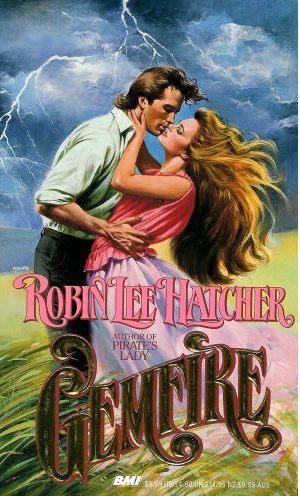 Fiery Gem McBride was hardly more than a child when Chase Dupre won her in a lucky hand of poker. She was only fifteen, but one look in his startling blue eyes made her yearn to be woman enough to hold firm. Left behind at Chase's sprawling cattle match. Gem dreaded of the day he would come back to rescue The Four Winds from the threat of rustlers and claim her yearning body in his hard muscled arms. But never did she imagine he would return with a sultry Latin beauty clinging to his side. Chase belonged to another woman now, but his flesh still burned to possess the innocent girl he had abandoned, and his heart longed to awaken in her the shimmering ecstasy of GEMFIRE

Book Description Leisure Books. Mass Market Paperback. Condition: Good. A copy that has been read, but remains in clean condition. All pages are intact, and the cover is intact. The spine may show signs of wear. Pages can include limited notes and highlighting, and the copy can include previous owner inscriptions. At ThriftBooks, our motto is: Read More, Spend Less. Seller Inventory # G0843930861I3N00

Book Description Leisure Books. Mass Market Paperback. Condition: GOOD. Spine creases, wear to binding and pages from reading. May contain limited notes, underlining or highlighting that does affect the text. Possible ex library copy, thatâ ll have the markings and stickers associated from the library. Accessories such as CD, codes, toys, may not be included. Seller Inventory # 3031545480

Book Description Leisure Books, 1991. Condition: Good. A+ Customer service! Satisfaction Guaranteed! Book is in Used-Good condition. Pages and cover are clean and intact. Used items may not include supplementary materials such as CDs or access codes. May show signs of minor shelf wear and contain limited notes and highlighting. Seller Inventory # 0843930861-2-4