Items related to Front Row: Evenings at The Theatre

Front Row: Evenings at The Theatre 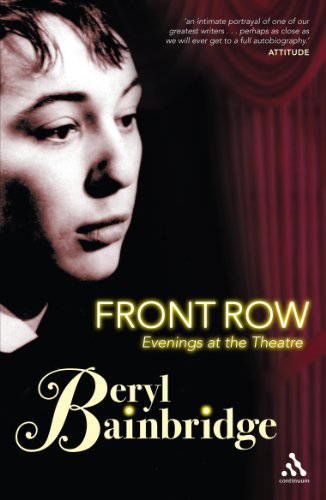 Best known as an acclaimed novelist, Beryl Bainbridge is also a former actor. Expelled from school in Liverpool at the age of fourteen, she determined to tread the boards, joining the Liverpool Playhouse Theatre Company as an assistant stage manager. Here she received a unique form of education, reading Shakespeare and Ibsen, and eventually graduating from the role of a dog to the part of a boy mathematical genius for which she had to have her hair cut. Later she appeared in two early episodes of Coronation Street as Ken Barlow's girlfriend. Her love of the theatre endured after she became among the best-loved writers of her generation. One of her most successful novels, "An Awfully Big Adventure", drew on her theatrical experiences, and she has often written about the theatre, in her former column in "The Standard", and more recently, in the monthly theatre reviews she writes for "The Oldie"

'Bainbridge the novelist can't resist the essential absurdity of people pretending not to be themselves eight times a week... the sending-up, however, is done with great affection. Bainbridge can never be a great critic of the theatre because she loves it too deeply and still identifies with people on the other side of the proscenium arch.'--Kate Saunders "Sunday Times "

'The refreshing aspect of this collection of reviews is that you feel they have been written by someone who is open to the experience of what she is about to see without prejudging it... her real strength is her outline of the story, which, as one of our foremost novelists, is hardly surprising. The emphasis in all of these reviews is on a succinct appraisal of the narrative and an appreciation of the writer... will appeal to anyone wanting a browse through that decade, not only of the plays, but also some of the sociological phonomena of that decade, in the always entertaining company of the author.' Camden New Journal

'Enjoyable... there is a lack of snobbishness in the columns collected here; Bainbridge is as happy to sit through Shakespeare as she is through a farce or a muscial. She still marvels at the magic of theatre and her reviews lack the dour quality of so many braodsheet hacks... Front Row is an ideal book to gorge all at once or dip into every now and then... an idiosyncratic record of the last decade of the theatre, but also an intimate portrayal of one of our greatest writers and is perhaps as close as we will ever get to a full autobiography.' Attitude Magazine

'Your professional critic is inclined to go to see a play with their knives sharpened and ready to use if it doesn't meet their preconceived expectations, whereas Dame Beryl goes more as a punter.' Islington Tribune

'... I was not a stranger to the world of the stage. At the age of five I became a member of the Thelma Bickerstaff tap-dancing troupe appearing at the Garrick Theatre, Southport. Four years later I went solo and sang Kiss Me Goodnight Sergeant Major to an audience of wounded soldiers transported from the local hospital.'

'This volume has a wonderful and insightful introductory essay, whilst also containing comment on the work of those such as Alan Bennett and Alan Rickman, and some delightful anecdotes fromBainbridge's early days in the theatre.' Good Book Guide, 01/09/2006

'...The reviews in this book are mainly of a random selection of plays in the 1990s and will appeal to anyone wanting a browse through that decade, not only of the plays, but also some of the sociological phenomena of that decade, in the always entertaining company of the author.'--Sanford Lakoff "West End Extra "

Dame Beryl Bainbridge is one of the most succesful and loved contemporary novelists. Her recent novels have included An Awfully Big Adventure, Master Georgie, The Birthday Boys and According to Queenie. She lives in Camden Town in London.

1. Front Row: Evenings at The Theatre

2. Front Row: Evenings at The Theatre