Items related to History of Political Ideas: Revolution and the New... 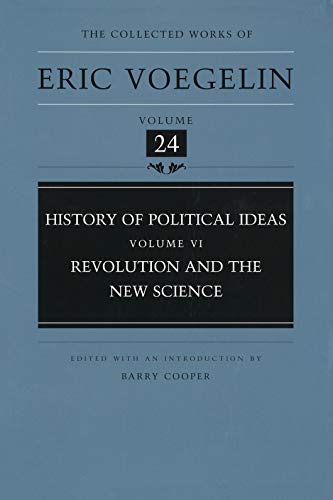 This study of the history of Western political ideas begins with a discussion of the conflict between Bishop Bousset and Voltaire concerning the relationship between what is conventionally identified as sacred and profane history, and goes on to examine the ""New Science"" of Vico.

Eric Voegelin (1901-1985) was one of the most original and influential philosophers of our time. Born in Cologne, Germany, he studied at the University of Vienna, where he became a professor of political science in the Faculty of Law. In 1938, he and his wife, fleeing Hitler, emigrated to the United States. They became American citizens in 1944. Voegelin spent much of his career at Louisiana State University, the University of Munich, and the Hoover Institution at Stanford University. During his lifetime he published many books and more than one hundred articles. The Collected Works of Eric Voegelin will make available in a uniform edition all of Voegelin's major writings. Barry Cooper is Professor of Political Science at the University of Calgary. He is the author or editor of numerous books, including The Collected Works of Eric Voegelin, Volume 1, On the Form of the American Mind.

Book Description University of Missouri Press, United States, 1999. Hardback. Condition: New. Language: English. Brand new Book. Volume VI of Voegelin's account of the history of Western political ideas continues from the point reached in the previous volume with the study of the mystic-philosopher Jean Bodin. Voegelin begins with a discussion of the conflict between Bishop Bossuet and Voltaire concerning the relationship between what is conventionally identified as sacred history and profane history. Bossuet maintained the traditional Christian position, the origin of which may be traced to Saint Augustine's City of God. Voegelin shows, however, that while Bossuet may have been heir to an adequate understanding of human existence, Voltaire drew attention to a series of historical facts, such as the comparative size of the Russian and Roman empires, the existence of Chinese civilization, and the discovery of the New World, that could be incorporated into Bossuet's account only with great difficulty or not at all.For the first time, the theoretical problem of the historicity of evocative symbols of political order becomes the focus of Voegelin's analysis. This major problem, which found a provisional solution in the New Science of Vico, was intertwined with several additional ones that may be summarized in terms of an increasing closure toward what Voegelin calls the world- transcendent ground of reality. Voegelin traces the consequences of the new attitudes and sentiments in terms of an increasing disorientation in personal, social, and political life, a disorientation that was expressed in increasingly impoverished experiences and accounts of history and of nature.Vico represents the great exception to this decline in the intellectual adequacy of modern political ideas and modern self- understanding. Readers familiar with Voegelin's New Science of Politics will find in the long, challenging, and brilliant chapter on Vico and his New Science one of the major textual analyses that sustained Voegelin's entire intellectual enterprise. Indeed, the chapter on Vico, along with similarly provocative and insightful chapters on Bodin and on Schelling in other volumes, may almost be read as an element of Voegelin's own spiritual autobiography. Seller Inventory # BZV9780826212009