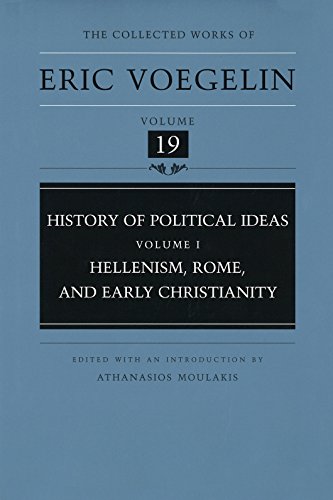 From the decline of the Greek Polis to Saint Augustine, this text provides an account of Apostolic Christianity's political implications and the work of the early church fathers. It considers the political philosophy of Rome and includes an analysis of Greek and early Roman law.

About the AuthorEric Voegelin (1901-1985) was one of the most original and influential philosophers of our time. Born in Cologne, Germany, he studied at the University of Vienna, where he became a professor of political science in the Faculty of Law. In 1938, he and his wife, fleeing Hitler, emigrated to the United States. They became American citizens in 1944. Voegelin spent much of his career at Louisiana State University, the University of Munich, and the Hoover Institution at Stanford University. During his lifetime he published many books and more than one hundred articles. The Collected Works of Eric Voegelin will make available in a uniform edition all of Voegelin's major writings. About the EditorAthanasios Moulakis is Herbst Professor of Humanities at the University of Colorado in Boulder. He is the author of several books, including the winner of the Frederic W. Ness Book Award, Beyond Utility: Liberal Education for a Technological Age and Simone Weil and the Politics of Self-Denial.

Book Description University of Missouri Press, United States, 1997. Hardback. Condition: New. New. Language: English. Brand new Book. Reaching from the decline of the Greek Polis to Saint Augustine, this first volume of Eric Voegelin's eagerly anticipated History of Political Ideas fills the gap left between volumes 3 and 4 of Order and History. The heart of the book is the powerful account of Apostolic Christianity's political implications and the work of the early church fathers. Voegelin's consideration of the political philosophy of Rome and his unique analysis of Greek and early Roman law are of particular interest.Although History of Political Ideas was begun as a textbook for Macmillan, Voegelin never intended it to be a conventional "synthesis." He sought instead an original comprehensive interpretation, founded on primary materials and taking into account the most advanced specialist scholarship--or science as he called it--available to him. Because of this, the book grew well beyond the confines of an easily marketable college survey and until now remained unpublished.In the process of writing it, Voegelin himself outgrew the conceptual frame of a "History of Political Ideas," turning to compose Order and History and the other works of his maturity. History of Political Ideas became the ordered collection of materials from which much of Voegelin's later theoretical elaboration grew, structured in a manner that reveals the conceptual intimations of his later thought. As such, it provides an unparalleled opportunity to observe the working methods and the intellectual evolution of one of our century's leading political thinkers. In its embracing scope, History of Political Ideas contains both analyses of themes Voegelin developed in his later works and discussions of authors and ideas to which he did not return or which he later approached from a different angle and with a different emphasis.In Hellenism, Rome, and Early Christianity, Voegelin demonstrates that the "spiritual disintegration" of the Hellenic world inaugurated a long process of transition in the self- understanding of Mediterranean and European man. The reflections that emerge remain universal concerns regarding the order of human existence in society and history. Although one may come to different conclusions, Voegelin's responses to the problems of the period suggest avenues of investigation that are still little traveled. Seller Inventory # BTE9780826211262