Items related to Unspeakable Acts: The Avant-garde Theatre of Terayama... 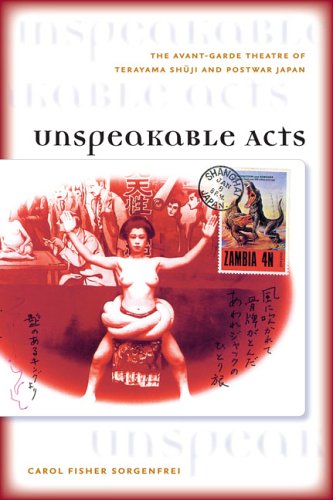 Terayama Shuji (1935-1983) was one of postwar Japan's most gifted and controversial playwrights/directors. Since his death more than twenty years ago, he has been transformed into a cult hero in Japan. Despite this notoriety, Unspeakable Acts is the first book in any language to analyze the theater of Terayama in depth. It interrogates postwar Japanese culture and theater through the creative work of this unique yet emblematic artist. By situating Terayama in his historical milieu and by using tools derived from Japanese and Western theories of psychoanalysis, anthropology, sociology, gender studies, and aesthetics, Carol Fisher Sorgenfrei has woven a sophisticated and provocative study.

"An insightful study and an absolute must for anyone interested in Japanese theatre and culture as well as in international theatre avant-garde movements." - Erika Fischer-Lichte, Institut fur Theaterwissenschaft, Berlin "An important book of original and excellent scholarship that is eminently readable by student, scholar, and professional alike." - John Gillespie, coauthor of Alternative Japanese Drama "A fascinating and thought-provoking picture of a theatre artist who excited, and continues to excite, strong feelings." - Brian Powell, Keble College, Oxford University, author of Japan's Modern Theatre "Terayama's paradoxes and wildly playful works and life are superbly documented and analyzed in Sorgenfrei's comprehensive book." - Richard Schechner, New York University"

Carol Fisher Sorgenfrei is professor of theater at UCLA, where she previously headed both the critical studies and playwrighting areas.