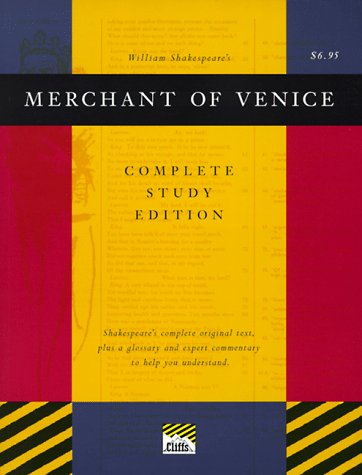 A reader's edition, modernized language ("you" for "thee," etc.) and glossary for unfamiliar words. The Merchant of Venice is one of the most popular of Shakespeare's plays, introducing for the first time a Jew as a three-dimensional memorable character. Another major element of the plot involves two other major characters in effective transgender mode. MoV is one of seven plays with transgender characters. This slightly revised reading edition includes a glossary, bibliography, and sketches by a very young Orson Welles as he imagines characters, sets, costumes, with a few sketched portraits of some of the famous actors of the past.

William Shakespeare, the third of eight children, was born on April 23, 1564 in the English market town of Stratford-upon-Avon. His father became the mayor of Stratford in 1568 and worked as a glovemaker and a moneylender. Four years after leaving school at approxi-mately the age of fourteen, Shakespeare married Anne Hathaway in November of 1582; their first child Susan-nah was born in May of the following year. Two years later, Anne gave birth to twins, Hamnet and Judith. Between 1585 and 1592, a period called “the lost years,” there is almost no evidence about Shakespeare’s life, nor is there any solid evidence about how or why he made his way to London to become a dramatist. By 1592, however, Shake-speare’s reputation as a playwright and poet had begun to grow. In 1594, he helped found a new theater company, the Lord Chamberlain’s Men, and be-came the company’s dramatist. Shakespeare’s success increased, and by 1598, the year he registered The Merchant of Venice, he had already purchased one of the biggest residences in Stratford. Some of Shakespeare’s richest dramatic work was written after the founding of the Globe Theater by the Lord Chamberlain’s Men in 1599, including Julius Caesar, Hamlet, Othello, King Lear, and Macbeth. After 1611, Shakespeare largely retired from the theater to spend more time in Stratford. He died in 1616 on his birthday, April 23, when he was fifty-two years old.

The Merchant of Venice is best known for its complex and ambiguous portrait of the Jewish moneylender Shylock--and of European anti-Semitism. Fascinating in its engagement with prejudice, the play is also a comedy of cross-dressing and disguise, and a dramatic exploration of justice, mercy, and vengeance. This volume contains the full text of the play with explanatory footnotes and marginal glosses for contemporary readers. A well-rounded selection of background materials not only illuminates anti-Semitism in early modern England but also provides context for other facets of the play, including its comic plot of love and marriage, its examination of usury and international trade, and its themes of revenge and the law.

Book Description Cliffs Notes, 1965. Paperback. Condition: Good. Connecting readers with great books since 1972. Used books may not include companion materials, some shelf wear, may contain highlighting/notes, may not include cdrom or access codes. Customer service is our top priority!. Seller Inventory # S_291445622

2. Shakespeare's the Merchant of Venice

Book Description Wiley & Sons, Incorporated, John, 1965. Condition: Good. Former Library book. Shows some signs of wear, and may have some markings on the inside. Seller Inventory # 6055926-75

Book Description Cliffs Notes. Condition: Good. . A copy that has been read but remains intact. May contain markings such as bookplates, stamps, limited notes and highlighting, or a few light stains. Seller Inventory # U14E-02290