Items related to Ecstasy: The Shadowdwellers 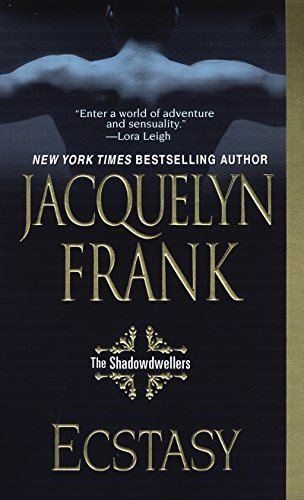 Among the Shadow dwellers, Trace holds power that some as willing to kill for. Without a stranger's aid, one rival would surely have succeeded, but Trace's brush with death is less surprising to him than his reaction to the beautiful, fragile human who heals him. By rights, Trace should hardly even register Ashla's existence within the realms of Shadow scape, but instead he is drawn to everything about her - her innocence, her courage, and her lush, sensual heat.After a terrifying car crash, Ashla Townsend wakes up to find that the bustling New York she knew is now eerie and desolate. Just when she's convinced she's alone, Ashla is confronted by a dark warrior who draws her deeper into a world she never knew existed. The bond between Ashla and Trace is a mystery to both, but searching for answers will mean confronting long-hidden secrets, and uncovering a threat that could destroy everything Trace holds precious.

Jacquelyn Frank is the New York Times bestselling author of the Nightwalkers series, the Shadowdwellers novels (Ecstasy, Rapture, and Pleasure), the Gatherers series, and the Three Worlds series (including Seduce Me in Dreams and Seduce Me in Flames). She lives in North Carolina. Visit Jacquelyn at jacquelynfrank.com.