Items related to The Soviet Mind: Russian Culture Under Communism 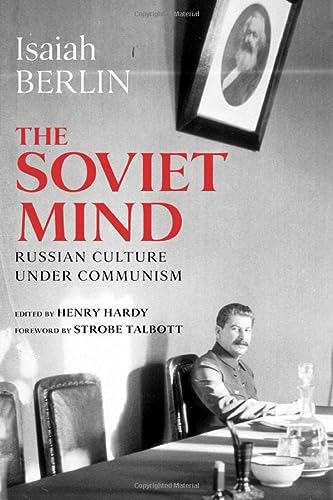 The Soviet Mind Isaiah Berlins response to the Soviet Union was central to his identity, both personally and intellectually. Never before collected, Berlins writings about the USSR include his accounts of his famous meetings with Russian writers shortly after the Second World War; the celebrated 1945 Foreign Office memorandum on the state of the arts under Stalin; his account of Stalins manipulative artificial di Full description

"This remarkable volume is superb. Berlin's great powers of observation combine with his great knowledge and literary gifts to provide us with a fascinating series of insghts.... Even a reader who is only casually interested in the history of Russia will be fascinated. Every day the media present us with lumps of coal, and to find a real diamond is a delight." --Geoffrey Riklin, "IntellectualConservative.com", 4/20/2004

"This collection of essays, some never published before and some not well known because they were published under pseudonyms to protect his remaining relatives living in Russia, are a remarkable group....For the committed reader, Berlin is the most congenial of writers. His writing style is inimitable, deriving as it does seamlessly from his style of speaking--pellucid yet labyrinthine, drawing the reader to the top of a conversational wave, and holding him there effortlessly, and allowing him to glide down the other side to a momentary calm, before the next wave carries him forward." --Patricia Anderson, "Quadrant", 4/15/2005

"As always, Berlin's writings are as engaging as they are informative. Framed between Hardy's preface and Rappaport's glossary, however, The Soviet Mind is a distinguished collection." --Jason Ferrell, McGill University, "Slavic and East European Journal"

."..a collection of Berlin's essays on Russia, Czarist and Stalinist, is a welcome arrival...What makes this book essential reading for Berlinophiles is that it contains essays never before published and some originally published under pseudonyms to protect relatives living in the Soviet Union. And they are as readable as when they were first composed." --Arnold Beichman, "The Washington Times", 5/2/2004

."..a useful compilation of Isaiah Berlin's writings about Russian and Soviet culture and history. His narratives of his encounters with Akhmatova...and Pasternak are included and offer intimate and thoughtful portraits of these great writers." --Paul Richardson, "Russian Life", 5/1/2004

Isaiah Berlin (1909–1997) taught for most of his life at Oxford University, UK, where he was successively professor of social and political theory and founding president of Wolfson College, UK. Thereafter he served as president of the British Academy.

Henry Hardy is a fellow of Wolfson College, Oxford University, UK. He is one of Isaiah Berlin's literary trustees and has edited a number of other collections of Berlin's essays.

Strobe Talbott is president of the Brookings Institution. He is the author of several books on Russia and the Soviet Union.