Items related to At The Edge Of Empire: The Terek Cossacks And The North...

Barrett, Thomas At The Edge Of Empire: The Terek Cossacks And The North Caucasus Frontier, 1700-1860

At The Edge Of Empire: The Terek Cossacks And The North Caucasus Frontier, 1700-1860 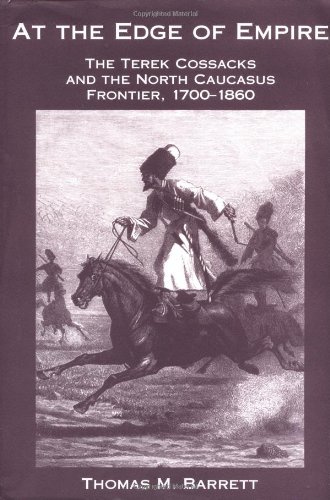 An innovative frontier history of one of the most contested regions of the Russian empire, this fresh approach to Cossack history is based on extensive archival research.. The Russian conquest of the North Caucasus was one of the most difficult imperial expansions in Russian history. This innovative study focuses on the local agents of Russian imperialism, the Terek Cossacks, and the difficulties they faced as state servants and frontier settlers. In the process of negotiating between the demands of the state and the needs of their communities, Terek Cossacks created a unique frontier society, more North Caucasian than Russian, neither wholly independent nor subservient, and representative of the strengths and weakness of the Russian empire writ large. Based on extensive archival research, At the Edge of Empire combines creative ethnohistory, environmental history, gender history, and other fresh methodological approaches. } At the Edge of Empire examines the history of the Cossack frontier settlements in the North Caucasus during the eighteenth and nineteenth centuries. The specific focus is the Terek Cossacks, frontier settlers along the Terek river who became servants of the Russian state, warriors, and occasionally soldiers for (and deserters from) the Russian imperial armies. Barrett reconsiders Cossack history with an eye for its relation to the policies and reality of pre-Soviet Russian imperialism. The rich historiography of the American frontier informs this re-evaluationthe Cossack interaction with native peoples and the formation of a unique frontier society closely mirror the contemporary borderland settlements in the American West. But Barrett presents Russian colonization as a fluid mixing of cultures rather than a cut-and dried military conquest, as it has previously been presented in ideology-laden histories of the Soviet Union. This opens up new ways in which to consider the myths and perceptions of historic Russian nationalism and its relation to state formation and ethnic identity in the Caucasus and post-Soviet Russia today. }

Thomas M. Barrett is assistant professor of history at St. Mary's college of Maryland. He has written numerous articles on the encounter between Russia and the North Caucasus and is presently writing a comparative history of the popular culture of the Russian and American frontiers.