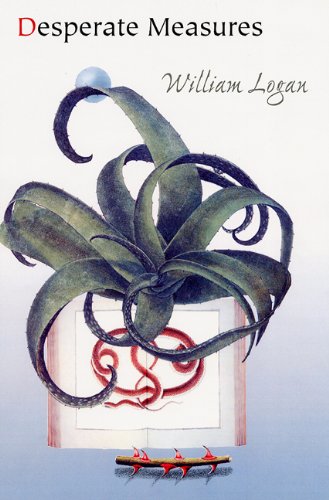 William Logan has been called ""the most hated man in American poetry"" and the most dangerous poetry critic since Randall Jarrell. Desperate Measures continues the critical fevers of Reputations of the Tongue (see below), a finalist for the National Book Critics Circle award in criticism. Beginning with an exploration of some of Robert Frost's least-known poems, these essays consider Ezra Pound's letters, T. S. Eliot's metaphysical lectures, the lightness of Elizabeth Bishop, and the civil tongue of Richard Wilbur, finding in poetry a language that lasts beyond the petty conventions of the age. Added to these thoughtful essays are provocative reviews of contemporary poetry, full of Logan's caustic wit and sharp-eyed scrutiny. He praises the moral rigor of Anthony Hecht and Geoffrey Hill, the raucous antics of Paul Muldoon, the natural warmth of Seamus Heaney, the violence of Christopher Logue, the cheerful abandon of Amy Clampitt. Intolerant of mediocre verse, Logan ranges widely through the poetry of America, Britain, and Ireland, finding much to criticize, though some of his judgments are surprising and he is rarely predictable. Logan's own poetry has been called dazzling, original, brilliant, and difficult. Like the distinguished poet-critics of the past, his criticism is an extension of a personal wrestling with language. While criticism of contemporary poetry is often pallid, diplomatic, and full of evasive judgments, Logan is willing to raise hackles, to be cheerfully controversial. The often eloquent criticism in Desperat, Measures, which views poetry from one end of the last century to the other, is a passionate defense of poetry in an unpo etic time.

The preeminent poet-critic of his generation. - Kirkus Reviews ""William Logan is the best practical critic around."" - Christian Wiman, Poetry

William Logan is professor of English at the University of Florida. He has published numerous volumes of poetry, including Sullen Weedy Lakes and Vain Empires, as well as two collections of criticism, Reputations of the Tongue and All the Rage. He has received the Peter I.B. Lavan Younger Poets Award from the Academy of American Poets and the Citation for Excellence in Reviewing from the National Book Critics Circle.