Items related to The Tiger's Wife 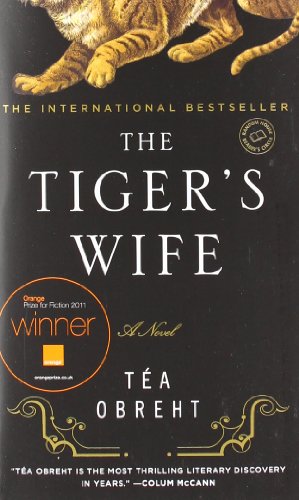 'Having sifted through everything I have heard about the tiger and his wife, I can tell you that this much is fact: in April of 1941, without declaration or warning, the German bombs started falling over the city and did not stop for three days. The tiger did not know that they were bombs...' A tiger escapes from the local zoo, padding through the ruined streets and onwards, to a ridge above the Balkan village of Galina. His nocturnal visits hold the villagers in a terrified thrall. But for one boy, the tiger is a thing of magic - Shere Khan awoken from the pages of The Jungle Book. Natalia is the granddaughter of that boy. Now a doctor, she is visiting orphanages after another war has devastated the Balkans. On this journey, she receives word of her beloved grandfather's death, far from their home, in circumstances shrouded in mystery. From fragments of stories her grandfather told her as a child, Natalia realises he may have died searching for 'the deathless man', a vagabond who was said to be immortal. Struggling to understand why a man of science would undertake such a quest, she stumbles upon a clue that will lead her to a tattered copy of The Jungle Book, and then to the extraordinary story of the tiger's wife.

[ THE TIGER'S WIFE BY OBREHT, TEA](AUTHOR)PAPERBACK

Téa Obreht is the most thrilling literary discovery in years. (Colum McCann)

The Tiger's Wife is a marvel of beauty and imagination. Téa Obreht is a tremendously talented writer. (Ann Patchett)

This is a distinguished work by almost any standard, and a genuinely exciting debut... Obreht has a vibrant, rangy, full-bodied prose style, which moves expertly between realistic and mythic modes of storytelling, conjuring brilliant images on every page... a delightful work, as enchanting as it is surprising, and Obreht is a compelling new voice. (Edmund Gordon THE SUNDAY TIMES)

the myth-infused tale of a young doctor in a war-ravaged Balkan country trying to find the truth about her grandfather's death. Obreht's novel is that rarity: a debut that arrives fully formed, super smart but wearing its learning lightly. Above all The Tiger's Wife bristles with confidence. (Adrian Turpin FINANCIAL TIMES)

Beautifully executed, haunting and lyrical, The Tiger's Wife is an ambitious novel that succeeds on all counts. It's a book you will want to read again and again. (THE INDEPENDENT)

The Tiger's Wife has been touted as one of 2011's outstanding debuts and it deserves its reputation...Weaving together fantastical tales and folklore with realism about coming to terms with loss and grief, it is also a book about the secrets people keep. This layering of stories creates a book rich in textures. Combining a mystery narrative, a family narrative and a book about the worlds of the imagination, Tea Obreht's novel is one that allows the reader to get lost in them. (METRO)

The Tiger's Wife, is assured, eloquent and not easily forgotten...war is just a backdrop, religions barely identified. It is the tiger, the deathless man, and the inquisitive doctor who lead the story through its layers of modern-day reality, magical realism, and folklore...her pacing in the book is delicious - Obreht has the storyteller's gift for suspense, and holds back details until the reader can wait no more...she has lived up to the early hype. (Joy lo Dico INDEPENDENT ON SUNDAY)

The brilliant black comedy and matryoshka-style narrative are among the novel's great joys...Obreht has prodigious talent for storytelling and imagery (Kapka Kassabova THE GUARDIAN)

Obreht's landscape hovers half in and half out of fable - where villagers who daily risk being hoisted by landmines also fear malign spirits, tigers' brides and men who transform into bears...It's a part of the world that Obreht has made her imagination's own: raucous and strange and gorgeous and rather haunting. This is a pretty formidable first novel. Here be tigers. (Sam Leith FINANCIAL TIMES)

The Tiger's Wife, [Obreht's] debut novel written on a creative writing course at Cornell University is dauntlessly composed. Cool American realism collides with abundant magic realism...she is a natural born storyteller and this is a startlingly suggestive novel about the dying out of myths and superstitions and rituals that bind people to place: the retreat of the spirits. (Lucy Daniel THE DAILY TELEGRAPH)

anyone looking for something different shouldn't hesitate (DAILY MAIL)

Obreht threads together echoes of community gossip and folklore, vividly evoking the claustrophobic atmosphere of a small village, and the feelings of fear and hope that become heightened at times of war. This is a tale of many layers...It is a poignant, seductive novel (Mary Fitzgerald THE OBSERVER)

Already Obreht has a gift for crafting sentences, harnessing metaphors, and cross-hatching stories about war and death that elude most writers twice her age...at a microlevel [The Tiger's Wife] is exquisite. It's the kind of novel that looks at is overarching theme of war by looking away, by zooming in on small, strange, slippery stories that may or may not be true...Many writers, from Rudyard Kipling to Yann Martel, have brought tigers to to life, but hers is a truly magnificent creation. (Chitra Ramaswamy SCOTLAND ON SUNDAY)

spellbinding...Tea Obreht's debut has the fantastical allure of a folk fable (MARIE CLAIRE)

'Natalia, a young doctor, is on her way to deliver aid to a remote orphanage when she discovers her beloved grandfather is dead. As she tries to reconstruct her grandfather's last journey, she recalls his stories, which combine folklore and mystery with his exquisite humanity. Set in a Balkan country adjusting to life after the war, the book resonates with the aftershocks of conflict, old enmities, fatalism and superstition. Haunting, thoughtful and beautifully atmospheric' (***** Life-changing) (PSYCHOLOGIES magazine)

varied, poignant and beguilingly fantastical...The Tiger's Wife is an exciting, fast-paced and mystical novel that'll have you rushing to the end. (TIME OUT (LONDON))

'Natalia is a doctor visiting orphanages in the Balkans when she hears her grandfather has died in strange circumstances. Half-remembered snippets from her childhood take her on a journey where she comes across the story of the tiger's wife. This beautiful read is 25-year-old Obreht's debut novel.' ***** (STAR magazine)

Recalling her grandfather's stories, Natalia takes to the road to investigate the life he led. Before long, a cast of characters assemble including an immortal man, an escaped tiger and the deaf-mute tiger's wife. In this unlikely company, a magical reality emerges in which the violent realities of war are overcome; lending the heavy subject a stunningly light touch. (STYLIST)

Obreht, who was born in the former Yugoslavia and is, astonishingly, only 25, writes with remarkable authority and eloquence, and she demonstrates an uncommon ability to move seamlessly between the gritty realm of the real and the more primary-colored world of the fable...a richly textured and searing novel. (NEW YORK TIMES (USA))

"The Tiger's Wife," in its solemn beauty and unerring execution, fully justifies the accolades that Ms. Obreht's short fiction inspired. She has a talent for subtle plotting that eludes most writers twice her age, and her descriptive powers suggest a kind of channeled genius. No novel this year has seemed more likely to disappoint; no novel has been more satisfying. (THE WALL STREET JOURNAL (USA))

Deftly walks the line between the realistic and the fantasticalżIn Obreht's expert hands, the novel's mythology, while rooted in a foreign world, comes to seem somehow familiar, like the dark fairy tales of our own youth, the kind that spooked us into reading them again and again...[Reveals] oddly comforting truths about death, belief in the impossible, and the art of letting go. (O: THE OPRAH MAGAZINE (USA))

A cracking, complex, gorgeously wrought saga that resonates as a meditation on life, love...and our responsibility to the stories we inherit from our grandparents...Obreht is a natural literary descendant of Isaac Bashevis Singer and Gabriel Garcia Marquez...The Tiger's Wife is an original and wonderful novel...It makes for a thrilling beginning to what will certainly be a great literary career (ELLE (USA))

[Obreht] spins a tale of such marvel and magic in a literary voice so enchanting that the mesmerized reader wants her never to stopż[She] is joltingly young to have found such a clear, wise voice, moored by the faintly droll storytelling style of her heritage and set free by her own tremendous talent (ENTERTAINMENT WEEKLY (USA))

One of the most extraordinary debut novels of recent memory...A gorgeous farrago of stories in which realism collides with myth, superstition with empirical fact, and allegory with history...Obreht elides the sentimental Chagall villages that other writers have made of Eastern Europe, crafting instead something far more ambitious, and universal: an apotheosis of storytelling as a bulwark against brutality - and a balm for grief (VOGUE (USA))

Ingeniously, Obreht juxtaposes [her protagonist's] matter-of-fact narration with contemporary folk tales that are as simple, enthralling, and sometimes brutal as fables by Kipling or Dinesen...Filled with astonishing immediacy and presence, fleshed out with detail that seems firsthand, The Tiger's Wife is all the more remarkable for being a product not of observation but imagination (Liesl Schillinger THE NEW YORK TIMES BOOK REVIEW (USA))

[A] brilliant debut...[Téa] Obreht is an expert at depicting history through aftermath, people through the love they inspire, and place through the stories that endure; the reflected world she creates is both immediately recognizable and a legend in its own right. Obreht is talented far beyond her years, and her unsentimental faith in language, dream, and memory is a pleasure. (PUBLISHER'S WEEKLY (USA))

Dizzyingly nuanced yet crisp, [and] muscularly written...This complex, humbling, and beautifully crafted debut from one of The New Yorker's 20 Under 40 is highly recommended for anyone seriously interested in contemporary fiction. (LIBRARY JOURNAL (USA))

Not even Obreht's place on The New Yorker's current "20 Under 40" list of exceptional writers will prepare readers for the transporting richness and surprise of this gripping novel of legends and loss...[Contains] moments of breathtaking magic, wildness and beauty...Every word, every scene, every thought is blazingly alive in this many-faceted, spellbinding, and rending novel of death, succor, and remembrance. (BOOKLIST (USA))

This debut novel from Tea Obreht has caused big waves in the literary world. Already nominated for an Orange Prize, it's being hailed as one of the year's best...A luminous debut. (CITY A.M.)

an ambitious and sophisticated work (MAIL ON SUNDAY)

Obreht's prose - precise, lucid, at times darkly comic and packed with arresting imagery - is reason enough to read this book, but Obreht is also a formidably gifted storyteller... this is a tremendous debut, and it was with real sadness that I turned the last page. (THE LADY)

This story by a 25-year-old Serbian-American woman, of a young Balkan doctor named Natalia, her family and their homeland, is highly original, funny and frightening, and proof that there is no formula for precocity. Winner of the 2011 Orange prize for fiction (THE ECONOMIST)