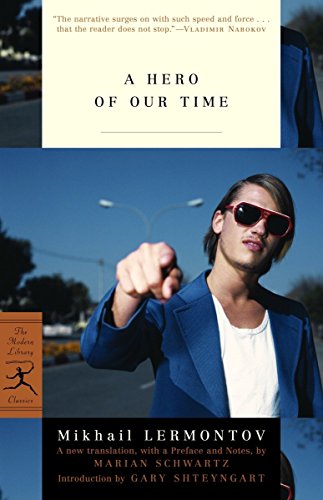 Since 1917 The Modern Library prides itself as The modern Library of the world s Best Books . Its paperback series feature treasured classics, major translations of great works, and rediscoveries of keen literary and historical merit. Featuring introductions by leading writers, stunning translations, scholarly endnotes and reading group guides. Production values emphasize superior quality and readability. Competitive prices, coupled with exciting cover design make these an ideal gift to be cherished by the avid reader. Despite his obvious talents and natural abilities, Pechorin is restless and bored. Travelling from the civilised world of society drawing rooms, to the wilds of the Southern Caucasus, he embarks upon a quest for motivation and stimulation. But rather than finding the impetus he so craves, he instead becomes increasingly alienated from those around him. Sickened by the condition of his times, he chooses to reject a life of morality. This study of a man - and a society - in crisis was to become one of the most important books of its time 'I...have read this novel several times, young and old, always hooked'

"It's high time an up-to-date and idiomatic version of "A Hero of Our Time "was made available to American readers. Marion Schwartz's translation of Lermontov's classic adventure novel captures all the suppleness and wit of Lermontov's prose, the fine texture of his descriptions and the galloping rhythm of his narrative passages. This is a fine addition to the Modern Library." -- Michael Scammell
"Military life in the Caucasus, bandits, duels, romance--at the hands of a passionate adventurer with "a restless imagination, an insatiable heart. That is Pechorin, and also Lermontov. If you have a personal all-time bestseller list, make room for "A Hero of our Time," "-- Alan Furst
"In Russia Mikhail Lermontov is considered one of the greatest writers of the nineteenth century. Marian Schwarz's compelling translation shows us why." --Peter Constantine

In Russia Mikhail Lermontov is considered one of the greatest writers of the nineteenth century. Marian Schwarz's compelling translation shows us why." --Peter Constantine

When this novel appeared in Russia in 1840 there was shock, there was horror. It was a slander and a libel and a slur on the younger generation. This often happens when a novel or play touches to the quick, but we do have to admit to our appetite for shock and horror. The equivalent in our time was The Angry Young Men, and while the fuss and noise was largely the creation of the Media, nevertheless it all went on for about ten years, and that couldn’t have happened if people hadn’t wanted to be shocked. There were actually reports of fathers trying to horsewhip their daughters’ impudent suitors. Splendidly anaphronistic stuff.
The emotions A Hero of Our Time evoked went rather deeper. Lermontov, unpleasantly attacked, said the book was indeed a portrait, not of himself, but of a generation. He was far from apologetic and spoke out of that sense of responsibility and authority then possessed by Russian writers. They saw themselves, and were generally regarded, as a public conscience. The writers of no other country have ever enjoyed this role.
So when Lermontov said he had diagnosed the illness but it was not his business to prescribe the cure, he disappointed.

2. A Hero of Our Time (Modern Library Classics)

3. A Hero of Our Time (Modern Library Classics)

4. A Hero of Our Time (Modern Library Classics)

5. A HERO OF OUR TIME (MODERN LIBRA

7. A Hero of Our Time (Modern Library Classics)