Items related to The Inside Story (The Sisters Grimm - Book 8)

Michael Buckley The Inside Story (The Sisters Grimm - Book 8)

The Inside Story (The Sisters Grimm - Book 8) 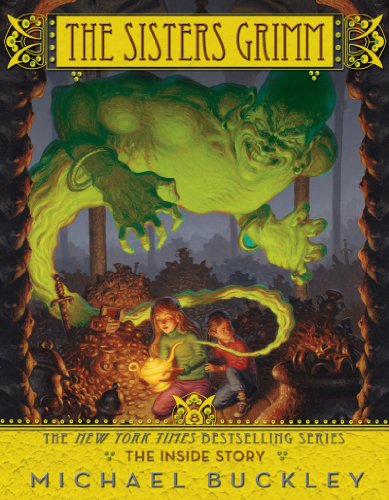 After the shocking ending of The Everafter War, this book picks up with Sabrina, Daphne, and Puck stuck in the Book of Everafter, where all the fairy tales are stored and enchanted characters can change their destinies. The girls (and Puck) must chase the Master through a series of stories, where they're willing to change what they need in order to save their baby brother. Soon, however, they are confronted by the Editor-the book's guardian-who, along with an army of tiny monsters known as Revisers, threatens the children with dire consequences if they don't stick to the stories. As they chase their quarry and dodge the Revisers, they meet Alice, Mowgli, Jack the Giant Killer, Hansel and Gretel, the Headless Horseman, and more. But will they find their brother in time?

Michael Buckley has written and developed shows for Nickelodeon, Disney, MTV Animation, the Sci-Fi Channel, the Discovery Channel, and VH1. In fall 2009 he launched a new series with Amulet Books: "NERDS: National Espionage, Rescue, and Defense Society. "He lives in Brooklyn, New York, with his wife and son. Peter Ferguson is a comic book and editorial artist who just published his first picture book with Tricycle Press. He is also the illustrator of the young adult novels "The Anybodies" and "The Nobodies," by N.E. Bode; "Endymion Spring," by Matthew Skelton; and DJ MacHale's Pendragon series. He lives in Argentina.

1. The Inside Story (The Sisters Grimm, Book 8)

2. The Inside Story (The Sisters Grimm, Book 8)

3. The Inside Story (The Sisters Grimm, Book 8)

4. THE INSIDE STORY (THE SISTERS GR

5. THE INSIDE STORY (THE SISTERS GR