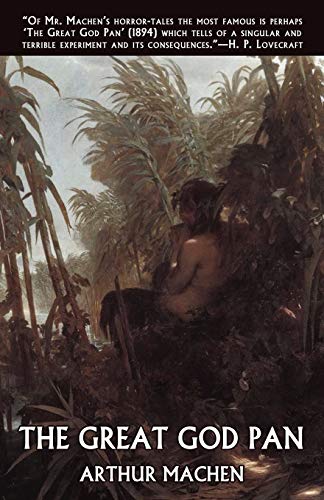 "Of Mr. Machen's horror-tales the most famous is perhaps 'The Great God Pan' (1894) which tells of a singular and terrible experiment and its consequences."-H. P. Lovecraft

Of creators of cosmic fear raised to its most artistic pitch, few can hope to equal Arthur Machen. -- H. P. Lovecraft

What can I say about a writer whose influence has been acknowledged by H.P.Lovecraft, Peter Straub, T.E.D.Klein, M.John Harrison and Clive Barker? Perhaps that he managed to communicate a sense of the inexpressibly and awesomely supernatural with more power than he ever knew. -- Ramsey Campbell

Arthur Machen (3 March 1863 – 15 December 1947) was a Welsh author and mystic of the 1890s and early 20th century. He is best known for his influential supernatural, fantasy, and horror fiction. His novella "The Great God Pan" (1890; 1894) has garnered a reputation as a classic of horror (Stephen King called it "Maybe the best [horror story] in the English language"). He is also well known for his influence on authors like H.P. Lovecraft and his leading role in creating the legend of the Angels of Mons.