Items related to The Wealth of Mr. Waddy (Crosscurrents/Modern Fiction) 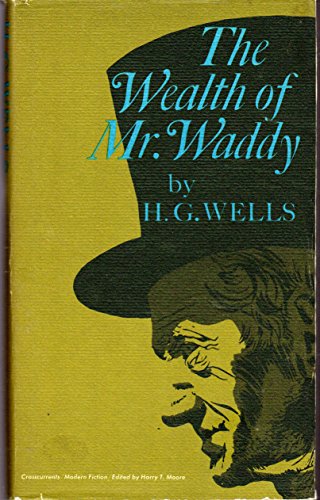 The discovery of a ?lost” manuscript by H. G. Wells is an exciting literary event, and the publishers of the Crosscurrents Modern Fiction series are proud to present the first publication of Wells’s The Wealth of Mr. Waddy.

A study of H. G. Wells’s correspondence reveals that as early as October 1898 he was discussing this new ?comic” novel, and that he continued work on the manuscript into March 1899. Then after more than a year’s silence about it in the existing correspondence, he says (April 23, 1900), ?Just at present Kipps turns out well,” and from there on he refers only to Kipps. In the Preface written in 1925 for the Atlantic Edition of his works, Wells recalls, ?Kipps was written in 1903-4. It is only a fragment of a much larger and more ambitious design. The original title was The Wealth of Mr. Waddy.? it was put aside, and I’m afraid destroyed.” Fortunately Mr. Wells was mistaken, for the discarded materials of the original manu­script are in the H. G. Wells Archive at the University of Illinois, where Professor Harris Wilson, the textual editor of this edition, found them.

Although the well-loved Kipps evolved from this larger work there are startling differences in the development of the characters that appear in both books, making Mr. Waddy a story worthy of being read and enjoyed on its own merits. And with this novel Harris Wilson, Professor of English at the University of Illinois, has made an important contribution to the Wells revival. In his Introduction he makes a critical examination of the manuscript and discusses its history; his Note on the Text is followed by a detailed description of the manuscript materials from which each chapter was given its final form, and a list of the emendations.

2. THE WEALTH OF MR. WADDY (CROSSCU