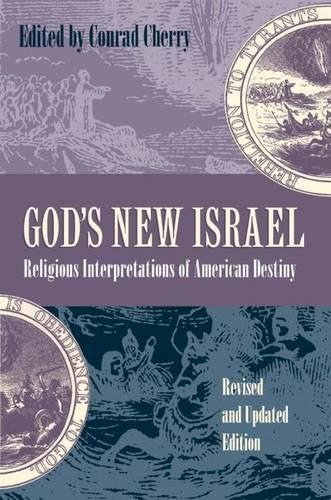 The belief that America has been providentially chosen for a special destiny has deep roots in the country's past. As both a stimulus of creative American energy and a source of American self-righteousness, this notion has long served as a motivating national mythology. God's New Israel is a collection of thirty-one readings that trace the theme of American destiny under God through major developments in U.S. history. First published in 1971 and now thoroughly updated to reflect contemporary events, it features the words of such prominent and diverse Americans as Jonathan Edwards, Thomas Jefferson, Brigham Young, Chief Seattle, Abraham Lincoln, Frances Willard, Martin Luther King Jr., Malcolm X, Ralph Reed, and Rosemary Radford Ruether. Neither a history of American religious denominations nor a history of American theology, this book is instead an illuminating look at how religion has helped shape Americans' understanding of themselves as a people.

A collection of 31 readings tracing the theme of American destiny under God through developments in US history. It features words of prominent Americans such as Jonathan Edwards, Thomas Jefferson and Martin Luther King, and demonstrates how religion shaped Americans' understanding of themselves.

Conrad Cherry is Distinguished Professor of Religious Studies and Director of the Center for the Study of Religion and American Culture at Indiana University-Purdue University at Indianapolis. His books include The Theology of Jonathan Edwards and Hurrying Toward Zion.