Items related to The Fall of the House of Walworth: A Tale of Madness...

O'Brien, Geoffrey The Fall of the House of Walworth: A Tale of Madness and Murder in Gilded Age America (John MacRae Books)

The Fall of the House of Walworth: A Tale of Madness and Murder in Gilded Age America (John MacRae Books) 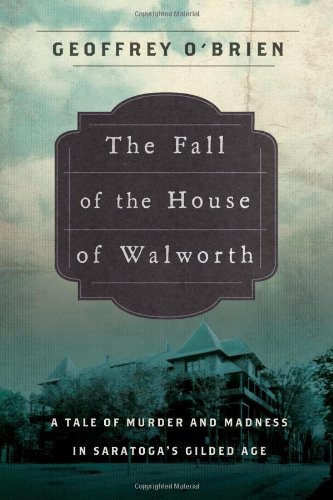 On June 3, 1873, a portly, fashionably dressed, middle-aged man calls the Sturtevant House and asks to see the tenant on the second floor. The bellman goes up and presents the visitor's card to the guest in room 267, returns promptly, and escorts the visitor upstairs. Before the bellman even reaches the lobby, four shots are fired in rapid succession.

Eighteen-year-old Frank Walworth descends the staircase and approaches the hotel clerk. He calmly inquires the location of the nearest police precinct and adds, "I have killed my father in my room, and I am going to surrender myself to the police."

So begins the fall of the Walworths, a Saratoga family that rose to prominence as part of the splendor of New York's aristocracy. In a single generation that appearance of stability and firm moral direction would be altered beyond recognition, replaced by the greed, corruption, and madness that had been festering in the family for decades.

"A hybrid of pulp and Poe . . . . [O'Brien's] saga of this prominent 1800s family of Saratogians has enough moments of melodramatic excess--religious fanaticism! inherited insanity! parricide!--to rival the most extravagant Gothic novels of the day. . . He combines an enthusiast's zeal for the potboiler and the penny press and a memoirist's almost melancholy fascination for the varnished-away traces of the past. O'Brien elaborates the denouement of the Walworth world with the same humor and insight that he applies to the particular mid-1800s knack for a sort of 'inflated, poeticized, oratorically cadenced language' that was a mirror of how the Warworths regarded themselves. . . . Red Smith wrote that to get to Saratoga Springs from New York City, 'you drive north for about 175 miles, turn left on Union Avenue and go back 100 years.' In his felicitous cultural history, O'Brien neatly pulls off the time-travel trick with no need to gas up the tank." --Eric Banks, The Chicago Tribune

"Geoffrey O'Brien's eloquent The Fall of the House of Walworth vividly resurrects the idiosyncratic and ultimately tragic malcontents who for four generations lived at Pine Grove. . . . Mr. O'Brien writes that Clara's mother and grandmother 'almost succeeded in sweeping from the house all traces of quarrels and ravings, of murder and of judicial punishment that killed the soul if not the body . . . [but] pieces of what had been left out were eventually to be found hidden in diaries, scrapbooks, letters.' These fragments, cast up like the shards from a wreck, Mr. O'Brien puts to brilliant use in reconstructing the tangled tale of the grand but dysfunctional Walworth dynasty." --Edward J. Renehan, Jr., The Wall Street Journal

"O'Brien salts his story of Walworth's arrest and murder trial with an anatomy of the Walworth family's bizarre cast of characters and the history of Saratoga Springs and its notoriety as a spa destination. But it is the sordid details of the marriage of Mansfield and his wife Ellen that had tongues wagging in 19th century New York that gives this history the spark of a modern-day suspense novel.... Readers will quickly turn pages in anticipation of the verdict in Frank's trial. O'Brien's cinematic prose is laced with society gossip, history and scandal. It's a perfect end-of-summer read." --Carol Memmott, USA Today

"Delicious and deceptively intricate. . . . Just as Madame Bovary is both a romance novel and a lucid critique of one, Geoffrey O'Brien's vivid and multilayered book, with its many Gothic touches and its remarkable reconstruction of family history, is an immeasurably more sophisticated example of precisely the kind of sensational crime fiction and fantasy he has set out to understand." --Christopher Benfey, The New York Review of Books

"O'Brien actually gets the proportions of his story, and just about everything else, dead right. . . . A century from now, if editors still exist, they'll be getting pitches for books that promise to reassemble the lives of O.J. Simpson or Bernard Madoff--long-forgotten characters whose discovery has excited some hopeful writer. That aspirant author would be well advised to turn to The Fall of the House of Walworth--a first-rate book about a second-degree murder--for lessons in how to do it." --Thomas Mallon, The New York Times Book Review

"Exquisitely written, by turns sad, surprising, and suspenseful, the book illuminates the rapidly changing world of 19th-century America, with its visions of virtue, codes of honor, class conflicts, and culture of aspiration." --Glenn C. Altschuler, The Boston Globe

"O'Brien is the ideal author for this project: knowledgeable about 19th-century history, a subtle critic of the family's legal and literary texts, and so entranced by the seamy details, he occasionally and joyfully eats the ormolu scenery.... The Fall of the House of Walworth is a gripping, Poe-inspired story that is a pleasing mix of highbrow literary taste and lowbrow sensationalism. O'Brien is at his best narrating the trial and wallowing in the muck of Mansfield's writing; but he has integrated these highlights into a coherent, entertaining narrative with admirable skill." --Emily Barton, The Los Angeles Times

"Exhaustively researched and well-written .... O'Brien uses the murder as a springboard to dive into larger questions of America's social legacy, in particular the rise of Saratoga Springs as one of the country's preeminent resorts of the rich and famous. In doing so, he unveils with almost Poe-like intensity the decline of the Walworth dynasty, which had become a prominent presence in that moneyed, horsey playground." --Brooks Peters, The Huffington Post

"A lively multigenerational family history of ambition, hereditary insanity, and loyalty through the antebellum, Civil War, and Gilded Age eras.... O'Brien effortlessly stitches together the story of two families who intermarry with great potential, only to realize complete disintegration--including the great Walworth Mansion, which has been replaced by a gas station." --PW, Starred Review

"Geoffrey O'Brien is the sort of author who arouses a wholesome envy in the hearts of other writers.... As a stylist, O'Brien can be boldly idiosyncratic, often using what used to be called experimental forms to give body to his arguments.... Despite its traditional format, what The Fall of the House of Walworth shares with O'Brien's earlier works is an agile, almost ventriloquistic voice, in which the language itself--apart from the content--conjures both the historical and the emotional atmosphere. O'Brien doesn't simply invoke the conventions of the Victorian gothic horror story, he re-creates them wholesale, much as the unfortunate Mansfield tried to reproduce the 'exquisitely modulated frenzies' of Poe, albeit with greater success. This book shares both the charms and blemishes of its Victorian subjects. It is thoroughly researched, artfully paced, and elegant." --Debby Applegate, Bookforum

"O'Brien's first true crime book, and a dandy one it is.... Because O'Brien is a writer of considerably more wit and cultural capaciousness than is often the case in the genre, the tale of a Saratoga 'first family's' turbulent journey through murder involves madness, marital war (involving as a referee a Walworth brother in Buffalo), literature, religious conflict and the apparently limitless but short-lived social ingenuity of American society and a mansion's decay considerably more protracted than the end of the House of Usher. A very satisfying specimen of its genre." --Jeff Simon, Buffalo News, Editor's Choice

"It's those evocative empty spaces, where O'Brien invites us to speculate on such mysteries as the possible vein of insanity running through the Walworth line, that give this book its remarkable eeriness. Like Frank's daughter, Clara, the last of the Walworths, sequestered in the clan's half-derelict Saratoga mansion in the book's opening sentences, we, too, are permitted to roam these forsaken rooms on our own recognizance." --Laura Miller, Salon.com

"The subject of this book is not so simple as good fighting evil; it's more like respectability duking it out with discord. The Fall of the House of Walworth is about the conflict between the parts of us that wants to compose hymns and the part that wants to commit murder. That's typical American ground, and what makes this volume as instructive as it is entertaining." --Carolyn See, BookWorld

"The Fall of the House of Walworth is a riveting tale of loyalty, love, ambition and murder--all the constituents of American life--seen through the lens of a single proud family and told with panache by a master storyteller." --Brenda Wineapple, author of White Heat: The Friendship of Emily Dickinson and Thomas Wentworth Higginson

"Geoffrey O'Brien may be one of the last great public intellectuals in American life, certainly the most stylish, meditative and refined, but also the boldest, willing to go anywhere his curious and often raffish interests lead him. In The Fall of the House of Walworth, O'Brien spreads his wings as never before and sweeps his readers into the amazing story of the Walworth family's decline, in Saratoga Springs and New York City, from accomplishment and respectability into violence, murder, prisons and asylums, not to mention the fragrantly self-regarding fiction of its murder victim, Mansfield Walworth. This is a great, swooping Gothic tale, and O'Brien opens every shadowy chamber to admit cleansing rays of intelligence, irony and compassion." --Peter Straub, author of A Dark Matter

"In his first foray into the realm of true crime, Geoffrey O'Brien--one of our finest culture critics and a master of elegant prose--has fashioned a stunning work of real-life American Gothic, a story whose sheer haunting power more than justifies its allusive title. The book spins a darkly gripping tale of ambition, pride and madness that ultimately attains to the level of tragedy. Anyone who still believes that the true crime genre is incapable of producing works of high literary merit will be obliged to think otherwise after reading this thrilling book." --Harold Schechter, author of Deranged and Killer Colt

Geoffrey O'Brien is a poet, editor, and cultural historian. He is editor in chief for the Library of America. His other nonfiction books include Hardboiled America, Dreamtime, The Times Square Story, Red Sky Café, and Sonata for Jukebox. He lives in New York City.

1. The Fall of the House of Walworth: A Tale of Madness and Murder in Gilded Age America (John MacRae Books)

2. The Fall of the House of Walworth: A Tale of Madness and Murder in Gilded Age America (John MacRae Books)

3. The Fall of the House of Walworth: A Tale of Madness and Murder in Gilded Age America (John MacRae Books)

4. The Fall of the House of Walworth: A Tale of Madness and Murder in Gilded Age America (John MacRae Books)

5. THE FALL OF THE HOUSE OF WALWORT