Items related to The Sociology of Childhood (Sociology for a New Century...

Corsaro, William A. The Sociology of Childhood (Sociology for a New Century Series)

The Sociology of Childhood (Sociology for a New Century Series) 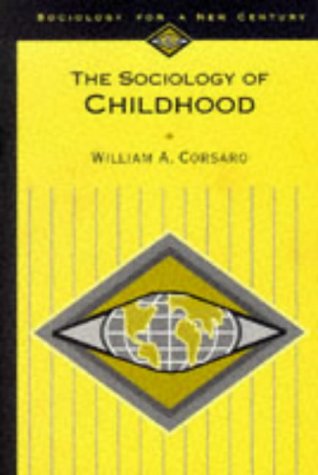 This volume brings an extraordinary range of theoretical ideas and empirical research to a neglected area of sociology. William A Corsaro shows how children contribute to both social stability and social change through a process of interpretive reproduction, and breaks new ground by stressing the conceptual autonomy of children.

Part One reviews traditional approaches to socialization and contrasts them with the author's perspective of interpretive reproduction. The second part places the new sociology of childhood in historical and cultural perspective. The importance of children's peer culture is defined and discussed in Part Three, and the last part considers children as social problems and also the social problems of children.

William A. Corsaro was Robert H. Shaffer Class of 1967 Endowed Chair and is now Professor Emeritus in the Department of Sociology at Indiana University, Bloomington where he won the President’s Award for Distinguished Teaching in 1988. He was the first recipient of the Distinguished Career Award for the Section on Children and Youth of the American Sociological Association in 2013. He taught courses on the sociology of childhood, childhood in contemporary society, and ethnographic research methods. His primary research interests are the sociology of childhood, children’s peer cultures, the sociology of education, and ethnographic research methods. Corsaro is the author of Friendship and Peer Culture in the Early Years (1985), author of “We’re Friends, Right: Inside Kids’ Culture (2003), and coauthor with Luisa Molinari of I Compagni: Understanding Children’s Transition from Preschool to Elementary School (2005).  He is the coeditor with Jens Qvortrup and Michael-Sebastian Honig of The Palgrave Handbook of Childhood Studies (2009). Corsaro was a Fulbright Senior Research Fellow in Bologna, Italy, in 1983-1984 and a Fulbright Senior Specialist Fellow in Trondheim, Norway, in 2003. He received an honorary doctorate from Uppsala University, Sweden in 2016.

The Sociology of Childhood Corsaro, William A.