Items related to An Economy of Abundant Beauty: "Fortune" Magazine...

An Economy of Abundant Beauty: "Fortune" Magazine and Depression America 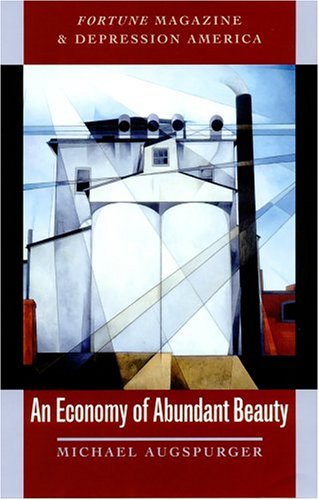 "We have made a breakthrough from an economy of scarcity to an economy of abundance," Henry Luce noted more than twenty years after founding Fortune magazine. "Can we make the breakthrough from an economy of abundance to an economy of abundant beauty?" Michael Augspurger's attractively illustrated book examines Fortune's surprising role in American struggles over artistic and cultural authority during the Depression and the Second World War. The elegantly designed magazine, launched in the first months of the Depression, was not narrowly concerned with moneymaking and finance. Indeed the magazine displayed a remarkable interest in art, national culture, and the "literature of business." Fortune's investment in art was not simply an attempt to increase the social status of business. It was, Augspurger argues, an expression of the editors' sincere desire to develop a moral capitalism. Optimistically believing that the United States had entered a new economic era, the liberal business minds behind Fortune demanded that material progress be translated into widespread leisure and artistic growth. A thriving national culture, the magazine believed, was as crucial a sign of economic success as material abundance and technological progress. But even as the "enlightened" business ideology of Fortune grew into the economic common sense of the 1950s, the author maintains, the magazine's cultural ideals struggled with and eventually succumbed to the professional criticism of the postwar era.

"Augspurger argues that in its first decades Fortune, which employed poets and intellectuals like Archibald MacLeish, Dwight Macdonald, and James Agee (one of whose failed assignments was a piece of sharecropping in the South, accompanied by photographer Walker Evans, that became the classic Let Us Now Praise Famous Men), was less concerned with money making than with advancing a vision of a new era of what Luce called 'abundant beauty': widespread leisure and artistic growth." Joshua Glenn, Boston Globe, October 24, 2004" "In this thoughtful, wide-ranging contribution to U.S. social and intellectual history, Augspurger looks at the evolving policy and contents of Fortune magazine as it reflected the changing political and social attitudes of enlightened business executives from the Depression to about 1954. . . . Particularly interesting is the discussion of the adversarial cultural ideologies of Fortune and Partisan Review, as they changed through the 1940s." Choice, February 2005" "In his engagingly written study of the first three decades of Fortune magazine, Michael Augspurger deftly interweaves three threads. He artfully summarizes the content of the journal's features from the early 1930s to the mid 1950s. As he does so, he forms impressions about the missions and visions of its creators. Augspurger concludes that Fortune offers a useful lens through which to study the rise and revision of 'corporate liberalism, ' the ideology of the growing class of corporate managers and professionals. . . . Augspurger offers many stimulating close readings of Fortune feature articles and pictorial essays. . . . Using choice quotations from its pithy prose, biographical sketches of its prominent contributors, and samples of its beautiful illustrations, Augspurger has created an elegantly written synopsis of the topics, concerns, and styles that appeared in the journal from the early 1930s to the mid-1950s." Alex Nalbach, Business History Review, Summer 2005" "More than the story of a major American magazine, Michael Augspurger's engaging study of Fortune accounts for epochal shifts in modern American culture from Depression-era populism and New Deal pragmatism through the triumph of corporate 'groupthink' in the postwar decades. Critically informed and richly illustrated, An Economy of Abundant Beauty makes an indispensable contribution to American studies." Walter Kalaidjian, Professor and Director of Graduate Studies, Department of English, Emory University" "If we want to understand what finally happened to 1930s politics, Fortune is a good place to look. Michael Augspurger has produced an elegantly written book that is not only interesting but persuasive about a magazine often dismissed as unproblematically corporatist." Cary Nelson, University of Illinois, Urbana-Champaign"

2. An Economy of Abundant Beauty: "Fortune" Magazine and Depression America