Items related to Beyond the Power Mystique: Power as Intersubjective...

Beyond the Power Mystique: Power as Intersubjective Accomplishment 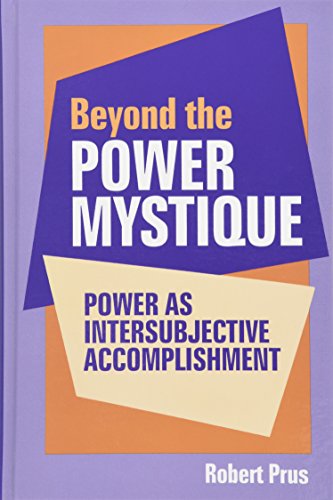 Despite the considerable attention given to 'power' by foundational sources such as Machiavelli, Hobbs, Weber, Durkheim, and Marx, and those social theorists who have built on their works, surprisingly little attention has been given to the study of power as an enacted feature of community life. Locating power more directly within a symbolic interactionist framework, Beyond the Power Mystique not only enables scholars to permeate much of the mystique shrouding power but, explicitly viewing power as intersubjective accomplishment, the material presented here fosters a research agenda that is highly attentive to the collectively articulated aspects of power relations.

Consideration is given to the ways in which power is brought into existence, implemented, experienced, sustained, objectified, resisted, dissipated, and reconstituted in actual practice. Addressing the full range of associations occurring in all human arenas, from small group settings to large scale theaters of operations, this volume provides a conceptually viable means of synthesizing so-called "macro" and "micro" realms of power. Prus considers people's definitions of, and routings into, situations of power, as well as the dilemmas they face, the strategies they assume, and the limitations they encounter as they enter into interchanges with others on both more individualized and collectively coordinated bases and in both long-term and more situated instances.

"This book will become a 'must have' item for many sociologists and practitioners. I am most impressed with Prus's keen understanding of the processual nature of human reality. He has brought us face-to-face with the intersubjective, providing a much needed return to empirical questions that are grounded in 'lived experience.' Prus's grasp of the theoretical underpinnings of interactionism, along with his deep knowledge of power processes, highlights the important contributions ethnographic investigations have been making all along and will continue to make." -- Lori Holyfield, University of Arkansas

"Prus shows a great insight into the subject and offers a first-rate, often unique and imaginative, analysis of power. His lists of steps, stages, features, and/or subprocesses associated with a host of social phenomena will, undoubtedly, guide future researchers in their investigations of social life. They strike me as unique constructions that provide clear evidence of his well-developed ethnographer's eye for the complexity of social processes." -- Thomas J. Morrione, Colby College About the Author:

1. Beyond the Power Mystique: Power As Intersubjective Accomplishment

2. Beyond the Power Mystique : Power As Intersubjective Accomplishment

Book Description State University of New York Press. Hardcover. Condition: Very Good. A copy that has been read, but remains in excellent condition. Pages are intact and are not marred by notes or highlighting, but may contain a neat previous owner name. The spine remains undamaged. At ThriftBooks, our motto is: Read More, Spend Less. Seller Inventory # G0791440699I4N00

3. Beyond the Power Mystique: Power As Intersubjective Accomplishment

4. Beyond the Power Mystique: Power as Intersubjective Accomplishment

Book Description SUNY Press, 1999. Condition: Good. A+ Customer service! Satisfaction Guaranteed! Book is in Used-Good condition. Pages and cover are clean and intact. Used items may not include supplementary materials such as CDs or access codes. May show signs of minor shelf wear and contain limited notes and highlighting. Seller Inventory # 0791440699-2-4