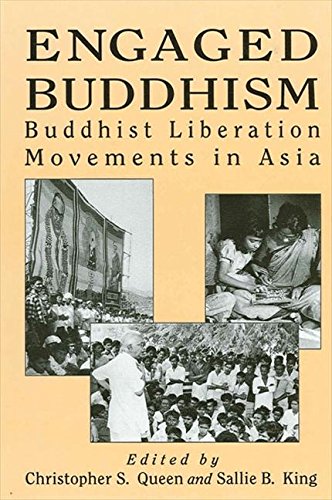 This is the first comprehensive study of socially and politically engaged Buddhism in the lands of its origin. Nine accounts of contemporary movements in India, Sri Lanka, Thailand, Tibet, Taiwan, Vietnam, and Japan are framed by interpretive essays. The historical development and institutional forms of engaged Buddhism are considered in the light of traditional Buddhist conceptions of morality, interdependence, and liberation; and Western ideas of freedom, human rights, and democracy.

Since the fiery self-immolation of the Vietnamese monk Thich Quang Duc on a Saigon street in 1963, "engaged Buddhism" has spread throughout Asia and the West. Twice in recent years the Nobel Prize for peace was awarded to Buddhists for their efforts to free their compatriots from totalitarian regimes. Engaged Buddhism presents ordained and lay Buddhist activists like Thich Nhat Hanh of Vietnam, Buddhadasa Bhikkhu and Sulak Sivaraksa of Thailand, A. T. Ariyaratne and the Sarvodaya Shramadana movement of Sri Lanka, Daisaku Ikeda and the Soka Gakkai movement of Japan, followers of the Indian Untouchable leader, Dr. B. R. Ambedkar, and Buddhist women throughout Asia. These leaders have campaigned relentlessly, attracted and organized millions of new converts, faced death threats, landed in jail, founded schools and universities, and produced a massive new Buddhist literature to restore social and economic justice to their societies.

Describes nine contemporary Buddhist movements and leaders in India, Sri Lanka, Thailand, Tibet, Taiwan, Vietnam, and Japan. Also explores the historical and institutional development of the movements in the context of traditional Buddhist conceptions of morality, interdependence, and liberation; and western ideas of freedom, human rights, and demo

Christopher S. Queen is Dean of Students and Lecturer on Religion in the Division of Continuing Education at Harvard University.

Sallie B. King is Head of the Department of Philosophy and Religion at James Madison University. She is the author of Buddha Nature and Journey in Search of the Way, both published by SUNY Press.