Items related to The Golem's Eye. 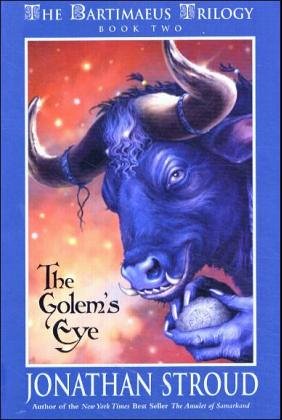 Two years have passed since the events of The Amulet of Samarkand and the young magician Nathaniel is rising fast through the government ranks. But his career is suddenly threatened by a series of terrifying crises. A dangerous golem makes random attacks on London and other raids, even more threatening, are perpetrated by the Resistance. Nathaniel and Bartimaeus travel to Prague, enemy city of ancient magic, but while they are there uproar breaks out at home and Nathaniel returns to find his reputation in tatters. Can he rescue it from his Machiavellian adversaries in the government bent on his destruction? A thrilling sequel in which the relationship between the young magician and the djinni remains as teasing and complex as ever.

Bartimaeus is back! After delighting many fantasy fans with his ancient wit and wily wisdom in the first instalment of Jonathan Stroud’s Bartimaeus Trilogy, The Amulet of Samarkand, the wise-cracking centuries-old djinn returns for the sequel and is on sparkling form once more. And despite the strong human stars in this superior magical adventure, it is difficult to think of any other character as its star. As follow-ups go, it’s almost as good and equally as enjoyable.

Nathanial, a talented magician and now fourteen, is a rising star in the Internal Affairs office of a magician-controlled government in a quasi-historic city of London. Confident of his abilities, there seems like nothing he cannot handle in his glittering career. But the growing resistance movement is disrupting the capital with its thefts and raids and Nathanial is asked to deal with it. When he makes little progress to track down the movement’s leader, Kitty Jones, Nathanial recalls the services of his familiar--Bartimaeus.

However, the young magician’s task is made more difficult when a series of terrifying attacks occur. They are perpetrated on London by a monster Golem who is manipulated by an unknown wizard, yet blamed on Kitty’s marauders. Bartimaeus and Nathaniel venture to Prague and beyond in their efforts to track their real enemies down.

Along the way, Stroud’s plots and counter-plots, class wars and magical phenomena, provide a ceaselessly readable narrative that is always entertaining. Chapters are alternately viewed from Bartimaeus, Nathanial and Kitty’s points of view and the added perspectives really help the reader to fully appreciate the author’s intricate plotting. Here is an invented fantasy world that rivals Garth Nix at his best and is rich and complex enough to be appreciated by some readers many years older than its intended younger audience. (Age 10 and over) --John McLay

Jonathan Stroud was born in Bedford and grew up in St Albans. He studied at York university. He has a strong background in children's books -working at Walker, in their Game Book and Non-Fiction departments and Kingfisher Publications, editing children's non-fiction. He has written and edited a number of game books and non-fiction titles for Walker Books and had three novels published by The Bodley Head before writing the Bartimaeus trilogy. Jonathan now lives in St. Albans with his wife and small daughter.