Items related to Placenames of France: Over 4,000 Towns, Villages, Natural... 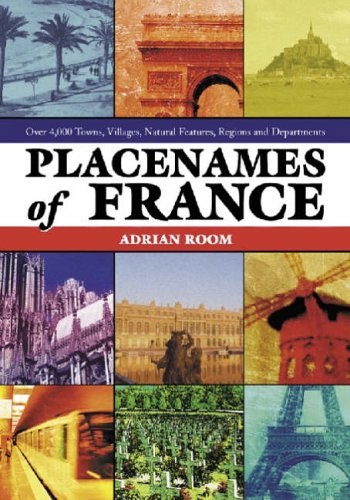 From Arles, Bibliotheque Nationale and fontana to sanctus, Joinville-le-Pont and Notre-Damedes-Champs, this work is an alphabetical dictionary of over 4000 placenames in both France and Corsica. Natural features such as rivers, mountains and islands; administrative regions such as historical provinces and modern departments; and inhabited centers such as cities, towns and villages are all listed here. When possible, entries include examples of the early forms of the names and cross-references are provided as appropriate. The text concludes with four appendices: "Key Elements in French Placenames," "Revolutionary Placenames," "Names of Paris Metro Stations" and "Names of Major Features in Paris."

"fascinating...recommended"--Choice; "The author researched his material exhaustively and has produced a resource that appears to be the first of its kind in English...appendices provide a wealth of information...highly recommended"--Reference Reviews.

A noted toponymist and onomastician, Adrian Room is the author of more than 50 reference books about words and names. He lives in Stamford, Lincolnshire, England.

Book Description McFarland & Company, Incorporated Publishers. Hardcover. Condition: Fair. A readable copy. All pages are intact, and the cover is intact. Pages can include considerable notes-in pen or highlighter-but the notes cannot obscure the text. An ex-library book and may have standard library stamps and/or stickers. At ThriftBooks, our motto is: Read More, Spend Less. Seller Inventory # G0786420529I5N10