Items related to The Communist Manifesto and Das Kapital (Knickerbocker... 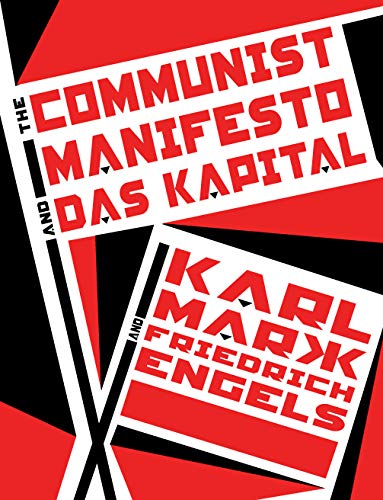 The unabridged versions of these definitive works are now available together as a highly designed paperback with flaps with a new introduction by Robert Weick. Part of the Knickerbocker Classics series, a modern design makes this timeless book a perfect travel companion.

Considered to be one of the most influential political writings, The Communist Manifesto is as relevant today as when it was originally published. This pamphlet by the German philosophers Karl Marx and Friedrich Engels, published in 1884 as revolutions were erupting across Europe, discusses class struggles and the problems of a capitalist society.

After being exiled to London, Marx published the first part of Das Kapital, a theoretical text that argues that capitalism will create greater and greater division in wealth and welfare and ultimately be replaced by a system of common ownership of the means of production. After Marx's death, Engels completed and published the second and third parts from his colleague's notes.

Born in Germany on May 5, 1818, Karl Marx was a socialist, journalist, historian, economist, and philosopher (1818–1883). While studying at the University of Berlin, he joined a movement of radical thinkers known as the Young Hegelians. His journalistic writings eventually got him expelled from Germany, France, and Belgium. In 1848, he published The Communist Manifesto with Friedrich Engels and was exiled to London, where he wrote the first volume of Das Kapital and lived the rest of his life.

Born in 1820, Friedrich Engels was a German revolutionist, philosopher, businessman, and journalist who, along with Karl Marx, co-founded modern socialism.

Robert Weick is the celebrated international touring actor of Howard Zinn's Marx in Soho, produced by Iron Age Theatre and directed by John Doyle. A veteran stage actor in Philadelphia, he is a two-time Barrymore nominee. Bob’s friendship and working relationship with the late Howard Zinn began in 2004 with the critically acclaimed, sold-out Philadelphia premiere of Marx in Soho. Robert has gone on to perform the piece over three hundred times across the United States. He lives in Philadelphia, Pennsylvania.

1. The Communist Manifesto and Das Kapital

2. The Communist Manifesto and Das Kapital

3. The Communist Manifesto and Das Kapital

Book Description Condition: New. Brand New Original US Edition.We Ship to PO BOX Address also. EXPEDITED shipping option also available for faster delivery.This item may ship from the US or other locations in India depending on your location and availability. Seller Inventory # ABBUN-124846