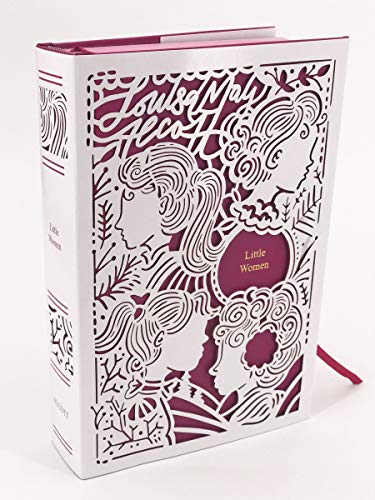 A fine, exclusive edition of one of literature's most beloved stories. Featuring a laser-cut jacket on a textured book with foil stamping, all titles in this series will be first editions. Only 10,000 copies will ever be printed, and each will be individually numbered from 1 to 10,000. "... and then the rooms were very still while the pages were softly turned, and the winter sunshine crept in to touch the bright heads and serious faces with a Christmas greeting." - Little Women, Louisa May Alcott Little Women follows sisters Meg, Jo, Amy and Beth as they endure hardships and enjoying adventures in Civil War New England. The timeless story of the March sisters, Little Women has been adored by generations. Readers have provided the audience for Jo's plays, rooted for neighbor Laurie's romantic pursuit, cried over little Beth's death, and dreamed of traveling through Europe with old Aunt March and Amy. In this simple, enthralling tale, Louisa May Alcott has created four of American literature's most beloved characters. Little Women (Seasons Edition -- Winter) is one of four titles available in October 2019. The winter season will include Pride and Prejudice, Wuthering Heights, A Tale of Two Cities, and Little Women.

Book Description Condition: Good. A+ Customer service! Satisfaction Guaranteed! Book is in Used-Good condition. Pages and cover are clean and intact. Used items may not include supplementary materials such as CDs or access codes. May show signs of minor shelf wear and contain limited notes and highlighting. Seller Inventory # 0785230807-2-4