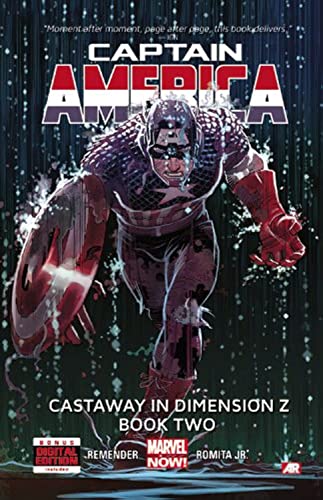 The odd saga of Dimension Z continues, with the shocking fate of Captain America revealed: Steve Rogers is dead...long live Captain Zola. But even as Arnim Zola gets everything he wants, a traitor strikes. Ian's fate is decided as Zola's master plan is revealed...but how does it all fit with Captain Zola's quest for lies, injustice and the Dimension Z way? Rick Remender and John Romita Jr. continue to put the star-spangled Avenger through his paces! Collecting: Captain America 6-10. Also includes exclusive AR video content.

Beginning his career in animation working on such films as The Iron Giant, Anastasia and Titan A.E., Rick Remender has become a comic-book triple threat - writing, penciling and inking numerous fan-favorite series. Remender served as writer on hit video games Dead Space and Bulletstorm, while providing art for punk/metal bands like NOFX and 3 Inches of Blood. He's co-created many popular independent titles, including the critically acclaimed Fear Agent with longtime collaborators Tony Moore and Jerome Opena. His time at Marvel started on Punisher and has since led to well-received runs on Uncanny X-Force and Venom.

John Romita Jr. is a modern-day comic-art master, following in his legendary father's footsteps. Timeless runs on Iron Man, Uncanny X-Men, Amazing Spider-Man and Daredevil established him as his own man artistically, and his work on Wolverine and World War Hulk is arguably the most explosive comic art of the last decade. In addition to Eternals with writer Neil Gaiman, JRJR teamed with Mark Millar on the creator-owned Kick-Ass, later developed into a blockbuster feature film starring Nicolas Cage. Spider-Man fans rejoiced at the artist's return to Amazing Spider-Man with the "Brand New Day" storylines "New Ways To Die" and "Character Assassination." He later helped relaunch Avengers with writer Brian Michael Bendis and Captain America with Rick Remender, and contributed to the blockbuster crossover Avengers vs. X-Men.