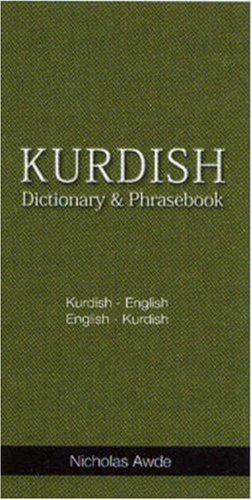 Kurdish is the collective name for a group of languages spoken across Turkey, Armenia, Georgia, Azerbaijan, Syria, Iraq and Iran. This book covers the three main groups of the language - Kurmanci, Sorani and Zazaki - defining the correct use of grammar and pronunciation in each variation.

Kurdish is the name of a group of related languages spoken by Kurdish peoples across Turkey, Armenia, Georgia, Azerbaijan, Syria, Iraq and Iran. Kurmanci is spoken mainly across eastern Turkey, the Caucasus, and northern Iraq, while the Zaza people of southeastern Anatolia, Turkey speak Zazaki. Sorani is spoken in both Iraq and Iran. These are the three primary Kurdish languages spoken across the Kurdish heartland of Kurdistan. The languages are presented in three distinct sections, each with its own grammatical introduction, pronunciation guide, two-way dictionary, and travel-oriented phrasebook. The book is also a valuable comparative reference for students of Kurdish. Sorania is usually written in a form of the Arabic script, but there is also a standard Roman alphabet, which is used in this book. Both Kurmanji and Zazaki are written in an easy-to-read Roman-based alphabet.

Nicholas Awde is a writer and regional consultant based in the Caucasus and Central Asia. Peter Maghashyan is a freelance journalist, analyst, and consultant on regional, political, and economic issues. He is based in Yerevan, Armenia.