Items related to Under The Knife (MIRA)

Gerritsen, Tess Under The Knife (MIRA)

Under The Knife (MIRA) 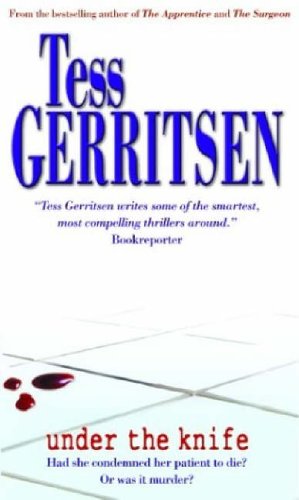 For David Ransom, it begins as an open-and-shut case. Malpractice. As attorney for a grieving family, he's determined to hang a negligent doctor. Then Dr. Kate Chesne storms into his office, dating him to seek out the truth -- that she's being framed. First, it was Kate's career that was in jeopardy. Then, when another body is discovered, David begins to believe her. Suddenly, it's much more. Somewhere in the Honolulu hospital, a killer walks freely among patients and staff. And now David finds himself asking the same questions Kate is desperate to have answered. Who is next? And why?

"Always skillful and entertaining, Gerritsen's memorable and enjoyable tale will remind readers of exactly why she remains so very popular." Booklist

Internationally bestselling author Tess Gerritsen is a graduate of Stanford University and went on to medical school at the University of California, San Francisco, where she was awarded her M.D. Since 1987, her books have been translated into 37 languages, and more than 25 million copies have been sold around the world. She has received the Nero Wolfe Award and the Rita Award, and she was a finalist for the Edgar award. Now retired from medicine, she writes full time. She lives in Maine.