Items related to Opium and Empire: The Lives and Careers of William...

Grace, Richard J. Opium and Empire: The Lives and Careers of William Jardine and James Matheson

Opium and Empire: The Lives and Careers of William Jardine and James Matheson 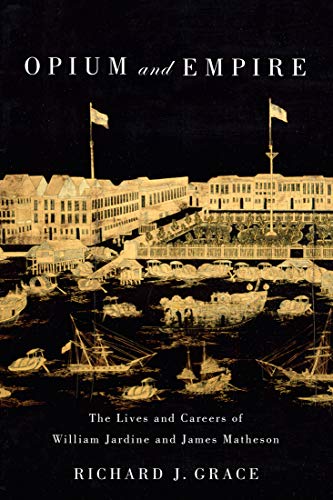 In 1832 William Jardine and James Matheson established what would become the greatest British trading company in East Asia in the nineteenth century. After the termination of the East India Company's monopoly in the tea trade, Jardine, Matheson & Company's aggressive marketing strategies concentrated on the export of teas and the import of opium, sold offshore to Chinese smugglers. Jardine and Matheson, recognized as giants on the scene at Macao, Canton, and Hong Kong, have often been depicted as one-dimensional villains whose opium commerce was ruthless and whose imperial drive was insatiable. In Opium and Empire, Richard Grace explores the depths of each man, their complicated and sometimes inconsistent internal workings, and their achievements and failures. He details their decades-long journeys between Britain and China, their business strategies and standards of conduct, and their inventiveness as "gentlemanly capitalists." The commodities they marketed also included cotton, rice, textile goods, and silks and they functioned as agents for clients in India, Britain, Singapore, and Australia. During the First Opium War Jardine was in London giving advice to Lord Palmerston, while Matheson was detained under house arrest at Canton in the spring of 1839, an incident which helped prompt the armed British response. Moving beyond the caricatures of earlier accounts, Opium and Empire tells the story of two Scotsmen whose lives reveal a great deal about the type of tough-minded men who expanded the global markets of Victorian Britain and played major roles in changing the course of modern history in East Asia.

"Grace provides an intricately researched exposition of the complexities, rivalries, and corruption involved in China’s tightly controlled trade with the 'barbarian west' and how Jardine and Matheson were best at the game." Choice

“Richard Grace has produced a well-structured and readable book which approaches the so-called Opium War from a refreshingly new angle, exploring the growing tensions on the China coast through the perspectives of the two men who established themselves as

“Opium and Empire is a fine book that should command scholarly interest. It is crisply written, absorbing, and Grace successfully challenges prevailing interpretations of Jardine and Matheson. Far from their caricature-like portrayals as ‘sinophobe warmon

Richard J. Grace is professor of history at Providence College.

2. Opium and Empire: The Lives and Careers of William Jardine and James Matheson