Items related to The Deptford Trilogy: Fifth Business, the Manticore,...

The Deptford Trilogy: Fifth Business, the Manticore, World of Wonders 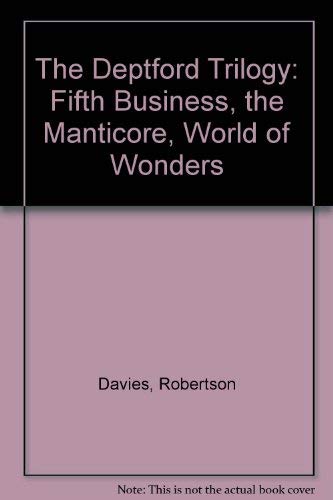 At two minutes to six on December 27th 1908 the lives of three people become inextricably bound together by the trajectory of a snowball. There is ten-year old Dunstable Ramsay, intended victim of the snowball, who, fatefully, ducks; his 'lifelong friend and enemy' Percy Boyd Staunton, angered by their recent quarrel, who hurls the snowball; and Paul Dempster, prematurely born when his pregnant mother is struck by Percy's icy missile. Tracing the rich and varied lives of these three individuals, The Deptford Trilogy lures the reader down labyrinthine tunnels of myth, history and magic in one of the most beguiling, clever and cunning trilogies ever written.

One of the great modern novelists (Malcolm Bradbury)

Thick and rich with humour, character and incident (Observer)

Robertson Davies was born in Thamesville, Ontario, in 1913. A novelist, playwright, literary critic and essayist, he received numerous awards for his work. It is as a writer of fiction that Robertson Davies achieved international recognition, with such books as The Salterton Trilogy (Tempest-Tost, Leaven of Malice and A Mixture of Frailties); The Deptford Trilogy (Fifth Business, The Manticore and World of Wonders); The Cornish Trilogy (The Rebel Angels, What's Bred in the Bone, shortlisted for the 1986 Booker Prize, and The Lyre of Orpheus); Murther & Walking Spirits, and The Cunning Man. Robertson Davies died in 1995.

The Deptford Trilogy: Fifth Business, The Manticore, World of Wonders

The Deptford Trilogy: Fifth Business, The Manticore, World of Wonders

Book Description Hardcover. Condition: Near Fine. Dust Jacket Condition: Near Fine. First Printing of the First Edition. Fine but for prev. owner name on ffep., in jacket with tiny traces of wear to extremities. An apparently unread copy. First canadian edition in one volume. Seller Inventory # 16149