A Canadian Tragedy: Joann and Colin Thatcher-A Story of Love and Hate 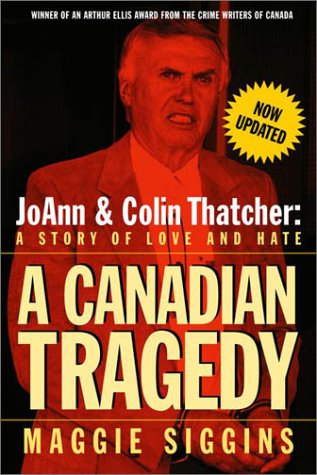 When this book was first published in 1985, it became an instant bestseller and the basis for the popular CBC-TV series “Love and Hate.” It’s easy to see why, when this true story reads like a crime thriller. Colin Thatcher was a golden boy, growing up the son of Saskatchewan’s Premier Ross Thatcher. But as he rose to political prominence and to a seat in the Saskatchewan cabinet, his marriage to JoAnn, the mother of his three children, began to unravel, amid rumours of infidelity and of domestic violence. His children disappeared; his estranged wife was shot at through her kitchen window, but Thatcher denied any knowledge of either incident and defied the law (and his old legislative buddies) again and again. The law wrung its hands, until JoAnn was finally bludgeoned to death in the family garage. At last, Thatcher had gone too far. In a dramatic trial in Saskatoon that involved every major legal figure in the province, he was found guilty of murder.

At that point, Maggie Siggins’s 1985 book was published. But the story was too big to end there. In his Edmonton jail, Thatcher stayed in the news by publishing his memoirs and exciting the media with news of dramatic new evidence that would prove his innocence. It never appeared. He was eventually moved to a minimum-security jail in British Columbia, and seemed to be living a fairly good life. Nonetheless, though his three children grew up believing in his innocence, rumours continued to fly around the Regina underworld about him.

In October 2000, Thatcher was the subject of a trial to see if he deserved early parole. Maggie Siggins was present, and this book gives a full account of the trial and of what has happened to all of the actors in this incredible case during the last 15 years.

· Now updated, with coverage of Colin Thatcher’s recent parole hearing
· Television series based on the book was a hit on both CBC and NBC
· Maggie Siggins is an experienced and articulate journalist, who won a Governor General’s Award for her book Revenge of the Land

Maggie Siggins is a journalist, author, and script writer. She is the author of eight books including A Canadian Tragedy: The Story of JoAnn and Colin Thatcher, which won an Arthur Ellis Award for crime writing and Revenge of the Land, which won a Governor General’s Award for Nonfiction.

Book Description Paperback. Condition: Very Good. Item is in very good condition. If supplemental codes/CDs for textbooks are required please contact us prior to purchasing as they may be missing. Photos are stock pictures and not of the actual item. Seller Inventory # DS-077108059X-2

Book Description Condition: Good. A+ Customer service! Satisfaction Guaranteed! Book is in Used-Good condition. Pages and cover are clean and intact. Used items may not include supplementary materials such as CDs or access codes. May show signs of minor shelf wear and contain limited notes and highlighting. Seller Inventory # 077108059X-2-4