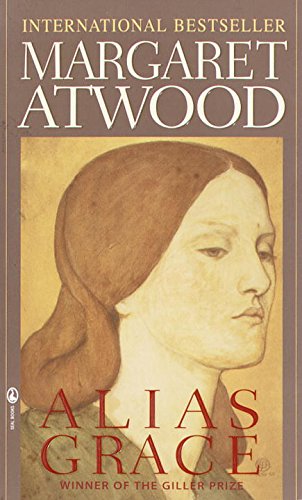 In this astonishing new work by the author of the bestselling The Robber Bride and Cat's Eye, Margaret Atwood re-creates a mysterious and disturbing murder and breathes new life into one of the most enigmatic and notorious women of the nineteenth century.

Grace Marks has been convicted for her involvement in the vicious murders of her employer, the wealthy Thomas Kinnear, and his housekeeper, Nancy Montgomery. Years later, Dr. Simon Jordan--an up-and-coming expert in the burgeoning field of mental illness--listens to Grace's story, from her family's difficult passage from Ireland to Canada, to her time as a maid in Thomas Kinnear's household. As Grace relives her past, Jordan draws her closer to a dark maze of relationships and her lost memories of the day her life was shattered.

Superbly evoking a century past, and alive with mesmerizing storytelling, Alias Grace is vintage Atwood.

In 1843, a 16-year-old Canadian housemaid named Grace Marks was tried for the murder of her employer and his mistress. The sensationalistic trial made headlines throughout the world, and the jury delivered a guilty verdict. Yet opinion remained fiercely divided about Marks- -was she a spurned woman who had taken out her rage on two innocent victims, or was she an unwilling victim herself, caught up in a crime she was too young to understand? Such doubts persuaded the judges to commute her sentence to life imprisonment, and Marks spent the next 30 years in an assortment of jails and asylums, where she was often exhibited as a star attraction. In Alias Grace, Margaret Atwood reconstructs Marks's story in fictional form. Her portraits of 19th-century prison and asylum life are chilling in their detail. The author also introduces Dr Simon Jordan, who listens to the prisoner's tale with a mixture of sympathy and disbelief. In his effort to uncover the truth, Jordan uses the tools of the then rudimentary science of psychology. But the last word belongs to the book's narrator--Grace herself.

'Brilliant ... Atwood's prose is searching. So intimate it seems to be written on the skin.' (Hilary Mantel)

'A sensuous, perplexing book, at once sinister and dignified, grubby and gorgeous, panoramic yet specific ... I don't think I have ever been so thrilled ... This, surely is as far as a novel can go.' (The Independent on Sunday)

'Alias Grace has all the pacing of a commercial novel and all the resonance of a classic.' (Washington Post Book World)