Items related to A Fire Upon the Deep (Zones of Thought)

Vinge, Vernor A Fire Upon the Deep (Zones of Thought)

A Fire Upon the Deep (Zones of Thought) 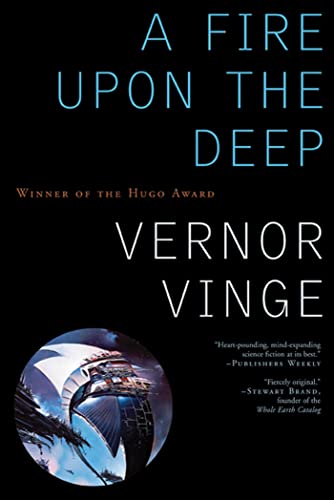 In this Hugo-winning 1991 SF novel, Vernor Vinge gives us a wild new cosmology, a galaxy-spanning "Net of a Million Lies", some finely imagined aliens, and much nail-biting suspense.

Faster-than-light travel remains impossible near Earth, deep in the galaxy's Slow Zone--but physical laws relax in the surrounding Beyond. Outside that again is the Transcend, full of unpredictable, godlike "Powers". When human meddling wakes an old Power, the Blight, this spreads like a wildfire mind virus that turns whole civilisations into its unthinking tools. And the half-mythical Countermeasure, if it exists, is lost with two human children on primitive Tines World.

Serious complications follow. One paranoid alien alliance blames humanity for the Blight and launches a genocidal strike. Pham Nuwen, the man who knows about Countermeasure, escapes this ruin in the spacecraft Out of Band--heading for more violence and treachery, with 500 warships soon in hot pursuit. On his destination world, the fascinating Tines are intelligent only in combination: named "individuals" are small packs of the dog-like aliens. Primitive doesn't mean stupid, and opposed Tine leaders wheedle the young castaways for information about guns and radios. Low-tech war looms, with elaborately nested betrayals and schemes to seize Out of Band if it ever arrives. The tension becomes extreme... while half the Beyond debates the issues on galactic Usenet.

Vinge's climax is suitably mind-boggling. This epic combines the flash and dazzle of old-style space opera with modern, polished thoughtfulness. Pham Nuwen also appears in the nifty prequel set 30,000 years earlier, A Deepness in the Sky. Both recommended. --David Langford

"A Fire Upon the Deep by Vernor Vinge is a genuine galactic epic. Weaving a large cast of humans and aliens, Vinge tells an exciting story in space and on several planets packed with ideas and wonder. This is big-scale science fiction at its best." --Fred Cleaver, the Denver Post

"Vast, riveting far-future saga involving evil gods, interstellar war, and manipulative aliens, from the author of The Peace War and the splendid Marooned in Realtime. No summary can do justice to the depth and conviction of Vinge's ideas. The overall concept astonishes; the aliens are developed with memorable skill and insight; the plot twists and turns with unputdownable tension." --Kirkus Reviews, starred review

"Thoughtful space opera at its best, this book delivers everything it promises in terms of galactic scope, audacious concepts, and believable characters both human and nonhuman." --The New York Times Book Review

"Vinge, whose characters are as interesting as the science this time, has produced a cosmic epic the equal of any in recent years." --The Houston Post

"Vernor Vinge's A Fire Upon the Deep is a wide-screen science fiction epic of the type few writers attempt any more, probably because nobody until Vinge has ever done it well. It has Hugo Winner written all over it." --The Washington Post Book World