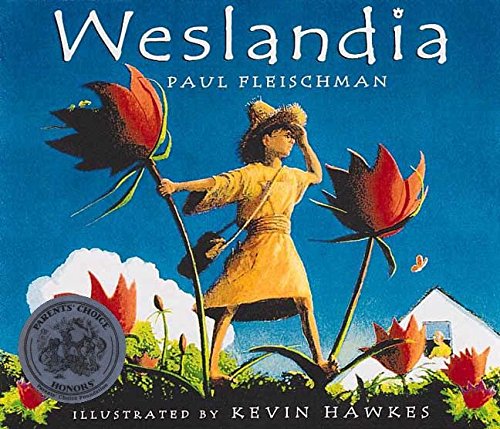 School is over and Wesley needs a summer project. Having learned that every civilization has a staple food crop, he decides to plant a garden and start his own--civilization, that is. He turns over a plot of earth in his yard, and plants begin to grow. Soon they tower above him and bear a curious-looking fruit. As Wesley experiments, he discovers that the plant will provide food, clothing, shelter, and even recreation. It isn't long before neighbors and classmates have developed more than an idle curiostiry about Wesley and exactly how he is spending his summer vacation. Enter the witty, intriguing world of WESLANDIA.

What do the children you know usually do when school is out for the summer? Go crazy with boredom? Head poolside with friends? Plan a self-sufficient civilisation with its own staple-food crop? That is precisely how Wesley decides to spend his summer vacation. Wesley is not an ordinary boy: "He alone in his town disliked pizza and soda, alarming his mother and the school nurse. He found professional football stupid. He'd refused to shave half his head, the hairstyle worn by all the other boys, despite his father's bribe of five dollars." It all started (the civilisation, that is) when Wesley overturns a plot of ground in his yard to see what new and unknown seeds might blow into it. Curiously, just one kind of plant grows--an unusual, flowering, fruit-bearing plant that tastes of "peach, strawberry, pumpkin pie, and flavors he had no name for". Soon, Wesley is literally reaping the fruits of his labours--using the fruit rind to make a cup for the juice he squeezes, barbecuing the root tubers, and weaving the bark into a hat to keep off the sun.

In Wesley's new world, he no longer needs a watch because he uses a flower stalk as a sundial, dividing the day into eight segments, one for each of the flower's petals. A new language (based on an 80-letter alphabet) and counting system (based on the number 8) soon follow. Ah, Weslandia. Slowly but surely his once-tormenting classmates become curious. And soon enough, Wesley allows them to help him crush seeds for oil, which "had a tangy scent and served him both as suntan lotion and mosquito repellent". He also invents sports that are less distasteful to him than football--"games rich with strategy and complex scoring systems", and watches patiently as his classmates blunder. Wesley's parents said he looked happy for the first time in years. And when he returns to school in September? "He had no shortage of friends." Newbery Medal winner and onetime alternate-world creator Paul Fleischman shines in this deadpan-but-hilarious picture book, and illustrator Kevin Hawkes's splendid paintings will delight young readers with the explosion of colourful, comical details. Kids young and old will love the once-outcast hero Wesley and his Robinson Crusoe-style triumphs. (Ages 8 to 11, or for reading aloud to younger children) --Karin Snelson

Wesley is a nonconformist suffering rejection from classmates . . . until he puts his school lessons to use and founds his own civilization--Weslandia . . . Combining the allure of fantasy and science fiction with the dismissal of socially acceptable norms creates a true paradise for today's pre-teen and terrific fodder for social studies classes. At another level, the story works for younger children, who will be drawn to the art and appreciate Wesley's inventiveness, idominitable spirit, and ultimate triumph.
--The Horn Book (starred review)

This fantastical picture book, like its hero, is bursting at the seams with creativity . . . a vigorous shot in the arm to nonconformists everywhere . . . It's difficult to imagine a better pairing than Fleischman and Hawkes to bring this one of a kind kid--and his universe--so vividly to life.
--Publishers Weekly (starred review)