Items related to Trauma and Memory 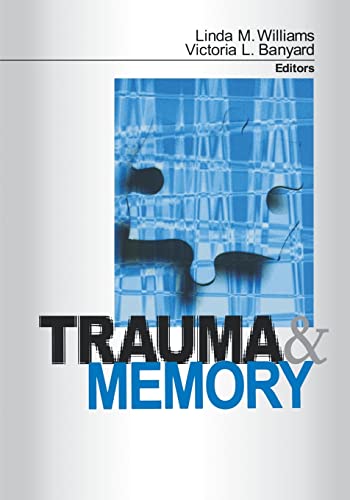 Taking an in-depth look at the most current research on memory of traumatic events, this book contains state-of-the-art data in the controversial area of repressed memory. Contributors, major figures in the field, integrate multidisciplinary findings into proposals for coherent treatment, and legal and social policy and practices.

Linda M. Williams received her Ph.D. in sociology from the University of Pennsylvania in 1979, where she studied at the Center for Research in Criminology and Criminal Law. Dr Williams was appointed in 2005 as Professor of Criminal Justice and Criminology, University of Massachusetts Lowell. She was Director of Research at the Stone Center, Wellesley Centers for Women from 1996-2005 and has directed longitudinal research on sexual exploitation of children and youth, the consequences of child abuse, violence against women, family violence, sex offenders and violence prevention for 33 years.

Professor Williams is author of 4 books and numerous scholarly publications on family violence including Partner Violence (1998), Trauma and Memory (1998), Nursery Crimes: Sexual Abuse in Day Care (1988), and The Aftermath of Rape (1979). She served on the National Research Councils’ Panel on Violence Against Women and as co-director of the National Violence Against Women Prevention Research Center. Dr. Williams has been principal investigator on 13 U.S. federally funded research projects. Current research includes research on child abuse recidivism, human trafficking and commercial sexual exploitation of children. She is principal investigator of a study of prostituted teens and at risk runaways funded by the U.S. Office of Juvenile Justice and Delinquency Prevention. Dr Williams is currently co-editing a special issue of the journal Child Maltreatment on “Child maltreatment and adolescent violence: Understanding complex connections.”

Integrating multidisciplinary findings into proposals for coherent treatment, legal and social policies and practice, Trauma and Memory provides state-of-the-art da ta from the most current research on memory by acknowledged experts in the field. '