Items related to Bin Laden: The Man Who Declared War on America

Bin Laden: The Man Who Declared War on America 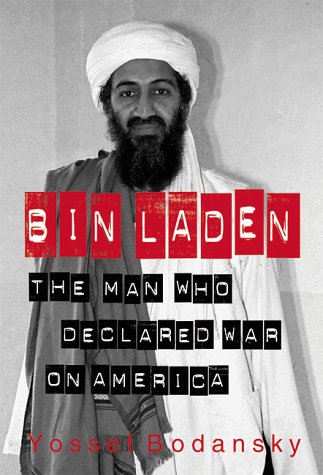 Answering the question, who is Osama bin Laden, this compelling account of the world's most infamous terrorist penetrates the inner circle of the man's terror network, revealing a web of operatives supported by the Iran regime and a web of financial assistance that can be traced back to some U.S. allies.

Shortly after terrorists led by Osama bin Laden attacked the U.S. Embassies in Kenya and Tanzania in 1998, President Bill Clinton ordered retaliatory missile strikes against targets in Afghanistan and Sudan. It was the first time the United States had responded to an individual terrorist with such overwhelming military force. Bin Laden, of course, is no run-of-the-mill rabble-rouser; Clinton called him "perhaps the pre- eminent organiser and financier of international terrorism in the world today." That's quite a label for someone who, as biographer Yossef Bodansky describes, "lives with his four wives and some fifteen children in a small cave in eastern Afghanistan" without running water. Yet he is "a principal player in a tangled and sinister web of terrorism-sponsoring states, intelligence chieftains and master terrorists." Remarkably little is known about the man; as Bodansky reveals, even the year of bin Laden's birth is uncertain. This book, then, is more than the story of a single terrorist. It's a description of a whole movement waging a jihad--holy war- -against the United States in the belief that America's modernising influence on Arab nations thwarts Islamic fundamentalist goals. Bin Laden is strikingly current, extremely well-informed, and thoroughly detailed. Readers interested in facts about the Middle East's violent underworld will find it fascinating--and chilling. Bodansky notes that Bin Laden has become a hero to radical Muslim youth, and "Osama" is now a very popular baby name in many Arab countries. --John J. Miller

Yossef Bodansky, an internationally renowned military and threat analyst, is the director of the Congressional Task Force on Terrorism and Unconventional Warfare. In addition he is the director of research of the International Strategic Studies Association (ISSA) and a senior editor for the Defense & Foreign Affairs group of publications. The author of six books on American defense and foreign affairs and a former senior consultant to the U.S. Departments of State and Defense, Mr. Bodansky actively participates in international forums and conferences in the United States and abroad.

1. bin Laden : The Man Who Declared War on America

2. bin Laden : The Man Who Declared War on America

3. bin Laden : The Man Who Declared War on America