Items related to Wizard of Oz: A Scanimation Book, The (Scanimation... 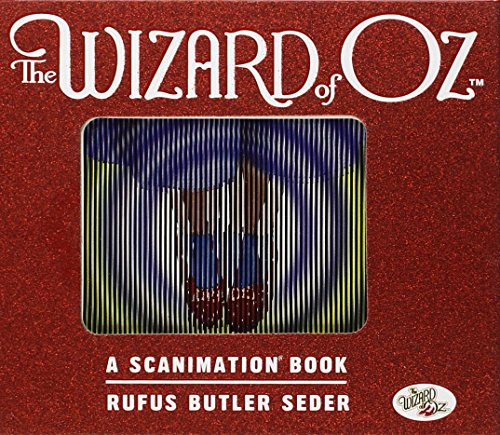 Like "Star Wars" before it, "The Wizard of Oz" is a marriage of phenomenal Scanimation - four books, four instant "New York Times" bestsellers, over 4.5 million copies in print - and one of the most beloved movies of all time. It also continues to be a vital icon: Warner Bros' 2009 release of the "70th Anniversary Ultimate Collector's Edition" won DVD critics' and numerous other awards; Warner Bros. launched wizardofozkids.com; and in 2011, Andrew Lloyd Webber is staging "The Wizard of Oz" on Broadway. Now the brand has found a perfect partner in Rufus Butler Seder. With equal parts love and skill, he's created 10 compelling Scanimations, taking us over the rainbow. A glittering, ruby-red cover is the final, delectable touch. The images include: Dorothy, the Tin Man, the Scarecrow, the Cowardly Lion, and Toto dancing down the Yellow Brick Road, The Wicked Witch of the West Melting, a close-up of Dorothy clicking her ruby slippers, and many more!

Rufus Butler Seder is an optical genius whose first significant invention was Lifetiles, glass-walled murals that appear to come to life when the viewer walks by. He s installed them at the Smithsonian, SeaWorld, Union Station, and other museums, aquariums, train stations, and ocean liners around the world. Next came Scanimation, and his company EyeThink, Inc., a business that produces a line of toys and gifts using technologies he s invented. Mr. Seder lives in Boston, Massachusetts.

1. Wizard of Oz Scanimation: 10 Classic Scenes from Over the Rainbow

2. Wizard of Oz Scanimation: 10 Classic Scenes from Over the Rainbow

3. Wizard of Oz Scanimation: 10 Classic Scenes from Over the Rainbow (Scanimation Books)

4. Wizard of Oz Scanimation: 10 Classic Scenes from Over the Rainbow