Items related to The Return 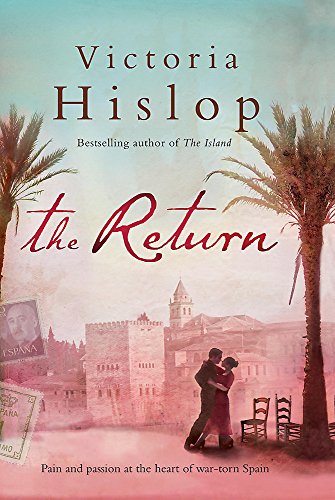 Beneath the majestic towers of the Alhambra, Granada's cobbled streets resonate with music and secrets. Sonia Cameron knows nothing of the city's shocking past; she is here to dance. But in a quiet café, a chance conversation and an intriguing collection of old photographs draw her into the extraordinary tale of Spain's devastating civil war.

Seventy years earlier, the café is home to the close-knit Ramírez family. In 1936, an army coup led by Franco shatters the country's fragile peace, and in the heart of Granada the family witnesses the worst atrocities of conflict. Divided by politics and tragedy, everyone must take a side, fighting a personal battle as Spain rips itself apart.

Captivating and deeply moving, Victoria Hislop's second novel is as inspiring as her international bestselling debut, The Island.

'At last - a beach book with a heart' (Observer)

'The Return may be a beach book, but it goes inland and rummages around in the cellars' (The Times)

'Fear not, Hislop fans, there was more where [The Island] came from... The story of the Spanish Civil War is...executed with verve and sensitivity' (Sunday Telegraph )

'The Return aims to open the eyes, and tug the heartstrings, of readers who mostly won't have read Orwell, let alone Cercas... These days, the battle of historical memory against forgetting has to be fought on many fronts. Hislop deserves a medal for opening a breach into the holiday beach bag' (Independent)

'Hislop somehow manages to capture the chaos and disintegration of Spain during the violence of the Thirties and Forties in a dramatic, immediate way... keeps you reading at breakneck speed right to the end' (Sunday Express)

'The queen of the intelligent beach read' (Sunday Express)

'Meticulously researched historical narrative and imaginative storytelling...brings home the hardships of war in a way no history book ever could' (Telegraph)

'The descriptions of war-ravaged Spain, of hand-to-hand fighting, bombardment of civilians, brutal atrocities by both sides and Europe's cold reception of refugees are very powerful' (Guardian)

An atmospheric, vibrant and moving tale of pain and passion at the heart of war-torn Spain, from the million-copy bestselling author of The Island

Book Description Hardback. Condition: Very Good. The book has been read, but is in excellent condition. Pages are intact and not marred by notes or highlighting. The spine remains undamaged. Seller Inventory # GOR001023401

Book Description Hardback. Condition: Good. The book has been read but remains in clean condition. All pages are intact and the cover is intact. Some minor wear to the spine. Seller Inventory # GOR001310517

Book Description Hardback. Condition: Fair. A readable copy of the book which may include some defects such as highlighting and notes. Cover and pages may be creased and show discolouration. Seller Inventory # GOR001679641

Book Description Hardback. Condition: Very Good. The book has been read, but is in excellent condition. Pages are intact and not marred by notes or highlighting. The spine remains undamaged. Seller Inventory # CIN000927727

Book Description Hardcover. Condition: Used; Good. Dispatched, from the UK, within 48 hours of ordering. This book is in good condition but will show signs of previous ownership. Please expect some creasing to the spine and/or minor damage to the cover. Grubby book may have mild dirt or some staining, mostly on the edges of pages. Seller Inventory # CHL6027263

Book Description Hardcover. Condition: Very Good. The Return This book is in very good condition and will be shipped within 24 hours of ordering. The cover may have some limited signs of wear but the pages are clean, intact and the spine remains undamaged. This book has clearly been well maintained and looked after thus far. Money back guarantee if you are not satisfied. See all our books here, order more than 1 book and get discounted shipping. . Seller Inventory # 7719-9780755332939