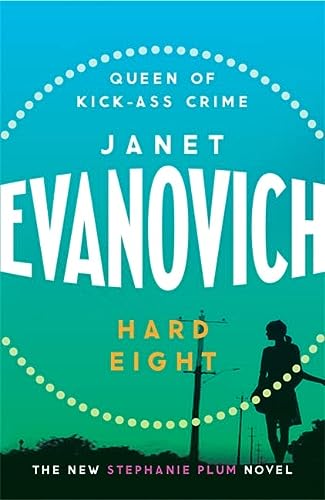 In Hard Eight, Stephanie Plum picks up a case a little nastier than anything the wisecracking bounty hunter's seen before. Evelyn Soder and her young daughter have gone on the run, leaving an angry ex-husband who's planning to collect on a child custody bond that will leave Evelyn's grandmother homeless. Stephanie's first clue that there's more to it than that comes in the form of Eddie Abruzzi: a shady local businessman who warns her to butt out of the case. Stephanie doesn't scare easily, but when Abruzzi's henchmen leave a bag of snakes on her doorknob and tarantulas in her car, she has no choice but to call Ranger, the hunky man of mystery to whom she already owes too many favours. Steph knows that Ranger will soon be calling in his debts, but with her ex-fiancé Joe Morelli out of the picture, that should be OK--shouldn't it?

In the meantime, she's got other fugitives to catch, aided by the usual band of misfits, plus a bumbling correspondence-school lawyer who's developed the hots for Stephanie's sister, Valerie. And Steph's in for a surprise from her mother, who proves she's not above wielding a dangerous weapon to save her daughter's life. Author Janet Evanovich has made a bold move in using a soupçon of child jeopardy to pull this series out of the comfortable but formulaic pattern it was threatening to fall into. It's still funny, and yes, some cars are destroyed, but now there's a real edge of darkness under the humour. Fans needn't fear, though: Jersey girl Stephanie is still full of sass and Tastykakes. --Barrie Trinkle, Amazon.com

A Jersey girl with Bette Midler's mouth and Cher's fashion sense...with her brazen style and dazzling wardrobe, who could resist this doll? - New York Times Book Review Evanovich's series of New Jersey comedy thrillers are among the great joys of contemporary crime fiction... All the easy class and wit that you expect to find in the best American TV comedy, but too rarely find in modern fiction. - GQ

Book Description 2005. Paperback. Condition: New. Paperback. It's a race against time when a child goes missing.The world of Stephanie Plum has never been wilder than in Hard Eight, the eighth fast-paced mystery in the Stephanie Plum series by Jan.Shipping may be from multiple locations in the US or from the UK, depending on stock availability. 352 pages. 0.282. Seller Inventory # 9780755329076

Book Description PAPERBACK. Condition: New. Book Cover and ISBN may be different from US edition but contents as same US Edition. Excellent Quality,Quick delivery, We may ship the books from Asian regions for inventory purpose. Our courier service is not available at PO BOX. Seller Inventory # nt_9780755329076

Book Description 2005. Paperback. Condition: New. Paperback. It's a race against time when a child goes missing.The world of Stephanie Plum has never been wilder than in Hard Eight, the eighth fast-paced mystery in the Stephanie Plum .Shipping may be from our Sydney, NSW warehouse or from our UK or US warehouse, depending on stock availability. 352 pages. 0.282. Seller Inventory # 9780755329076